First, a disclaimer. The unfortunate title of this movie, when it comes to writing a review about it, is in no way objective, as movie criticism never is. That said, what do you get when crossing the creative input of Blair Witch Project co-mastermind Daniel Myrick and co-screenwriter Wes Clark Jr., son of the retired general? Well, The Objective, I suppose.

Which might be described as an all purpose occult, hostile UFO, possible Soviet revenge, political sci-fi US invasion of Afghanistan horror war movie. At least Myrick ditched the shaky cam this time around for far less anatomically distressful production values, my stomach is appreciative.

The Objective pits a rowdy Special Ops US military team against both a secretive wimpy CIA Agent Keynes (Jonas Ball) they’re assigned to protect on a classified mission deep into the Afghan wilderness, and the hostile local Taliban fighters. The initially cocky and arrogant troops, who announce they’re switching it up this time around from “door kickin'” to “meet and greet,” tend to divide the Afghans into either villains or village idiots, take your pick. 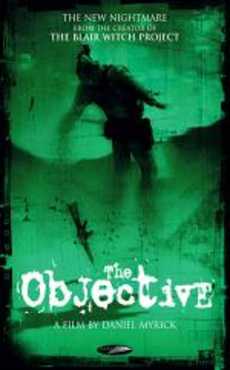 As they follow a mysteriously obsessed and ain’t talking Keynes into increasingly barren desert and mountainous terrain, having no idea where he’s leading them as he seems to be filming nothing in particular, the soldiers express their mounting frustration and annoyance with him and whatever CIA scheme he’s got them tangled up in to literally die for. Meanwhile, as they’re engaged in invisible enemy fire from all directions, their compasses incomprehensibly malfunction, and the water in their canteens in this dangerously arid terrain turns to sand, the soldiers lose their collective cool, to say the least. This, while Taliban fighter corpses vanish, mountain holy men issue dire predictions about the fate of the foreign invaders, and futuristic supernatural flashes of light the men have hunches are attacking UFOs, begin vaporizing and disappearing the troops.

With far too many mix ‘n match genres heaped indiscriminately on its plate, the film like the unfortunate soldiers, casts its net in too many directions for its own good, and dramatically disintegrates along the way. And though visually engaging, when the audience isn’t led to feeling even half as spooked as the characters, there’s serious trouble ahead, and we’re not just talking Taliban.

Which brings into serious question, what exactly is the objective of this similarly titled bleak cinematic jaunt? All that seems to be at play here, is that the CIA may be as fanatical and lethal in its own way as the enemy insurgents, or UFOs do exist, and watch out, they could be as dangerous as the primitive Taliban fighters in their own hi-tech way. Tossup Alert.