Back in time, women were routinely made to take the rap for all the destruction, disease and general bad luck that was visited upon the earth, by demonizing them as witches. And Italian horror maven Dario Argento (Suspira) would apparently like to resurrect those gender phobias without a hint of irony or reflection, in his latest Gothic slice-’em-up, The Mother of Tears (La Terza Madre}. While in a move to keep the torture tactics all in the family, one can only wonder why, the designated masochist ducking and dodging assorted demon damsels and other cannibalistic weirdos for the duration, is Argento’s own actress daughter, Asia.

The Mother of Tears herself is apparently the last remaining dreaded witch on earth, who’s been hibernating for a thousand years in the nude, waiting for some gullible soul to accidentally retrieve her buried tunic and bring her back to life. That unfortunate deed which involves the unsealing of a discovered buried urn, falls to a colleague of Sarah (Asia Argento) at The Museum Of Ancient Art in Rome, where both perform artifact restoration. Shortly after Sarah finds her co-worker hacked to death, the literal devil-may-care streets of Rome fall into chaos, with an epidemic of random murders, rapes, suicides and fires and a mother inexplicably tossing her infant off a bridge, as diabolical forces are seemingly unleashed. 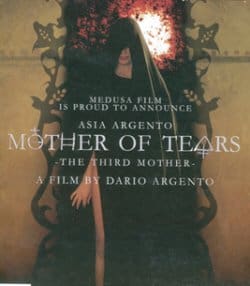 As Sarah dashes around the city in search of safety along with explanations, while eluding hordes of homicidal female maniacs easily detected because they wear too much makeup, she learns that the Second Age of Witches or some such, is in progress. Suddenly, dining on ripped out fresh human organs has become a steak tartare type of delicacy, while the up to no good she-devil worshipers in a dungeon below the city prepare to crown, or at least clothe, their nude head witch. And once in a while the ghost of Sarah’s dead mom turns up on street corners, a former good witch who dispenses occasional motherly advice, though she’s soon snuffed out too. But not before Sarah picks up a few pointers, like how to dump a demonically possessed boyfriend for good, by setting him on fire.