Combining the best of the worst of both worlds, Stephen King’s latest philosophical terror tactic stress-releaser The Mist sets up a battle between evil extra-terrestrial monsters and the more down to earth horrors that lurk within humans, and calls it basically a draw. There’s a good scare to be had here for those famished for their next fright fix, and on the other hand lots of cerebral toxic temptations for viewers obsessing more about the greatest horror show on earth brought on by ecological devastation, inhumanity and wars.

In the deceptively sleepy, bucolic town of Castle Rock, an unusually violent storm unleashes overnight, covering the burb with a blinding fog. Trapped in the local supermarket as unseen monsters feed on humans wandering about outdoors, are a cross-section of typical shoppers. But once awareness of their dire situation and panic kick in, the humans quickly lose their apparently thin veneer of civilized decorum, and turn on one another.

There are those with more patriarchal, take charge tendencies like David (Thomas Jane), a dad who stopped by to shop with his son and who tries with little success to calm the crowd and figure out a solution. Though one survivalist kinda guy has the balls to charge out into the deadly cloud solo to fetch his shotgun, and returns half the man he was – literally – from the bottom up.

But one clearly disturbed woman with religious hallucinations of the judgment day kind, Mrs. Carmody (Marcia Gay Harden), is able to rally the terrified humans into a bloodthirsty evangelical vigilante mob bent on sacrificing the Carmody nonbelievers to ward off the stalking creatures outside. An additional subtext rears its head, touching on a reckless top secret military experiment called the Arrowhead Project, at a base nearby, that may be exploring a close encounter with a dangerous world in the beyond. 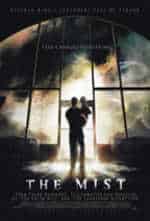 While combo panic and self-preservation instincts give rise to shopper anarchy that makes Christmas at the mall look like a cake walk in comparison, the more introverted in the crowd hunker down between the Wheaties and Cheese Doodles in aisle seven (product placement alert!), guzzling up the beer inventory to relieve collective heart palpitations. Eventually a horde of plus size nuclear bugs infiltrates the premises, and they’re not there to buy applesauce. But rather to shoplift and chow down on some take-out humans instead, never bothering to stop at the cash register. Though they make a point of bypassing the doctored Kool-Aid lady, who coos to them in religious aphorisms, as they apparently prefer their homo sapien dinner fare feisty and playing hard to get, rather than submissive and on the tender side.

This Stephen King eco-anthropological, pretty much all-you-can-eat beast feast terror spree gets the added juice of being adapted from King’s 1985 novel by the more metaphysically minded King screen scribe Frank Darabont (The Shawshank Redemption, The Green Mile). You might say the holiday season message among all this murky madness here, is that life is about a hell of a lot more than just shopping. The Mist would, in that regard, make for a great double bill with Reverend Billy’s delightfully delirious shopocalyptic screen sermon, Would Jesus Buy That. In any case, pass the tranquilizers.