Before you can say Love In The Time Of Cholera, Bardem seems to have moved on in quite a hurry from last week’s No Country For Old Men’s charming serial killer to Fiorentino’s sexist serial kisser. He’s a man drowning his sorrows in an endless round of quickies with 623 faceless babes in heat, while he waits five decades for Fermina’s haughty hubby (Benjamin Bratt) to die, hopefully sooner than later. 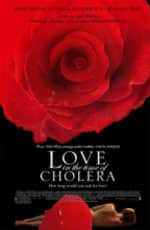 John Leguizamo chews up the 19th century Spanish Provincial scenery as a fretful father frantic to protect his daughter from men without money. Meanwhile, Bardem comes off as more lewd than likable, pouting his way through the film while hitting on any available hottie of the moment. The second movie in as many months (following Descent), about male rape, only this time the 40 year old virgin in question can’t get enough of being devoured by the mystery woman who overpowers him, and shamelessly lurks around for more.

While the sensuous established period scenery that the camera seemingly caresses around the Colombian seacoast city of Cartagena is exquisitely palpable, this lurid tale with an overblown sense of its own impressiveness and satirical effect is no match, lacking emotional coherence and empathy. Director Mike Newell, whose imagination was significantly more ignited filming Harry Potter and the Goblet of Fire, also helmed the dry gallows humor of Four Weddings And A Funeral. Love In A Time Of Cholera exhibits it’s own related ailment, namely the confidence of an attachment to a famed work of art that overshadowed the necessity to enthusiastically captures its essence in a movie.