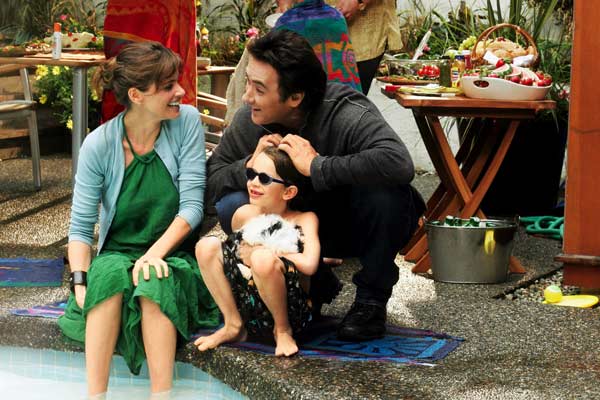 Just in case you’re looking around right now for a suitable children’s movie to share with the family, Martian Child might not be such a great idea. In other words, a movie about children is far from necessarily a movie for children.

Dutch born director Menno Meyjes concocts an oddly lightweight, special needs child fantasy from Martian Child’s heavy duty dysfunctional family screen psychodrama. Bobby Coleman is Dennis in Martian Child, a borderline catatonic tyke who thinks he’s a visitor from outer space. And at one point, he packs a suitcase to head back to Mars, by jumping off a tall building to get there. Not exactly a normal idea about wholesome family entertainment to take the kids to, especially if you don’t want to give them any ideas about fun vacations in faraway places.

Adapted from David Gerrold’s semi-autobiographical sci-fi page turner, this delusional yarn takes off from the premise that Dennis is convinced he’s from Mars in part because he just happens to be an orphan and has no idea who his parents might be. And in the market for a take-home kid at the moment, is lonely widower David (John Cusack, apparently into doing widowers right now, with the upcoming Grace is Gone). David is an eccentric, popular sci-fi writer who’s vocationally intrigued by the boy’s abnormal extraterrestrial obsessions.

More space cadet than alien from outer space, Dennis has taken to living inside a cardboard box, presumably away from the sun’s harmful rays on earth. And David sufficiently impresses the orphanage adoption team that he’s an ideal potential dad, after he coaxes Dennis from his box by handing him a tube of sunscreen.

Predictably, the relationship does not proceed smoothly. While the brand new dad had hoped for some creative inspiration in his sci-fi formulations from the celestially- obsessed child, Dennis’ bizarre habits around the house, like casting multi-lingual spells and stealing objects to take back to Mars as souvenirs, prove to be more of an annoying distraction for the full time writer-at-work, than anything else. Never mind, because David comes up with an imaginative idea for family bonding and shared quality time, by breaking all the dishes in the house together. As this is in no way a self-help type of movie, it’s not recommended to try these tips with problem children at home.

Also on hand for rather under-utilized sideline surrogate mothering while Mister Mom takes charge solo, are Cusack’s real life sister Joan doing a nervous wreck Auntie Liz, and Amanda Peet as Harlee, the best friend of David’s late wife. Harlee in her loyalty to her late friend’s memory, can’t deal with far too many qualms about crossing that line to lock lips with the handsome dude, and steal a tempting guilty pleasure or two. And like Harlee, the film succumbs to an identity crisis of its own, as to whether it’s loony Hollywood fantasy kid fare, or a serious-minded case study in childhood psychosis and essential parenting skills to meet the challenge.