Though the title The Lovely Bones is meant to conjure the unthinkable by combining the ideas of innocence and horror inherent in child murder, the movie itself fails in that regard, when it comes to the execution of the concept. In other words, an ornately envisioned Hollywood yarn about pedophilia, homicide and an ensuing enchanting afterlife, is more than a little like making a giddy musical about wife beating.

Still seemingly in mystically inclined fantasy mode, Lord Of The Rings’ Peter Jackson has adapted the Alice Sebold bestseller, but whitewashed graphic references to child rape and murder. So for instance, rather than the distraught parents (Rachel Weisz and Mark Wahlberg) confronting the horrific killing of their fourteen year old daughter Susie (Saoirse Ronan) with the discovery of skeletal remains, the police hand them her hat instead. Hopefully impressionable children in the audience won’t be misled into thinking that being hit on by a child predator on the way home from school and then escaping to a glittery heavenly realm, can be a cool adventure.

The Lovely Bones unfolds as a series of flashbacks narrated by the unfortunate Susie from her perch in the netherworld. A kind of 20th century Middle-earth overlooking an ominous 1970s suburban Pennsylvania landscape, this supernatural realm allows the departed Susie to observe and ponder, but little else. Immersed in a schoolgirl crush at the time of her death, Susie is too busy to notice the creepy reclusive neighbor (Stanley Tucci) who’s been watching her, as he prepares to methodically unleash his inner beast. 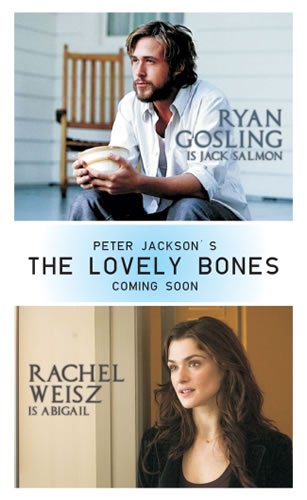 Throughout the rest of the movie, Susie is intent on touching, in a myriad of mystical ways, the lives of those who were once part of her world. While her rowdy alcoholic grandma makes wildly inappropriate bids to keep the emotionally disintegrating family together, courtesy of Susan Sarandon in an elder free spirit cameo, that nearly steals the show.

In an odd thematic switch where the dead can’t seem to let go of the living when it’s always the other way around in the real world, Jackson likewise conceives of an excessively whimsical ambiance thoroughly inappropriate to the grim subject matter at hand. And with only Tucci’s chilling, truly scarier than Hannibal Lechter psychopath holding the tense scenario together, bolted to planet earth as best he can.

Which brings up that symbolic centerpiece of the story, a snow globe sealing a penguin within. A perfect permanence, but a prison nevertheless. Kind of like Peter Jackson himself, mesmerized by his own surreal fantasy trappings of a theme park afterlife, while the story is secondary with little space to breathe and flow. So The Lovely Bones begs the question, whose snow globe.

The Lovely Bones: Lurid Of The Rings