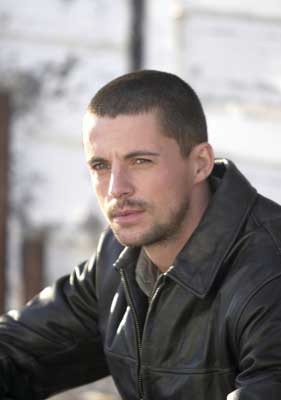 Chris Pratt (Joseph Gordon-Levitt) was on top of the world till the night he decided to tempt fate by speeding down a country road with his headlights turned off. That impulsive decision to show off behind the wheel changed his life in an instant when his car plowed into a stalled farm combine.

Two of his close friends died in the crash, while his girlfriend, Kelly (Laura Vandervoort), survived but lost a leg and never spoke to him again. And Chris suffered a severe head trauma which left him with crippling brain damage.

Four years after the accident, he’s still in rehabilitation trying to relearn the ability to master simple motor tasks everybody takes for granted. Because he suffers from short-term memory loss, he must write copious notes to himself as reminders of what needs to be done. 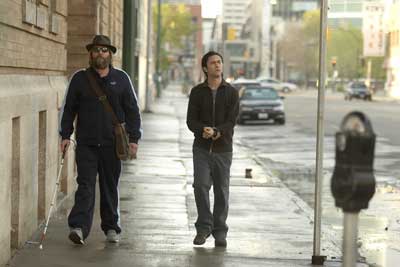 With his career prospects severely limited by this mental incapacity, Chris considers himself lucky to be employed as a night janitor at the Noel State Bank & Trust. This tragic tableau sets the table for The Lookout, a crime caper ostensibly-inspired by Memento (2000), for what we have here is another whodunit centered on a hero afflicted with amnesia.

The plot thickens the day Chris is befriended by Gary Spargo (Matthew Goode), a shady character claiming to be an acquaintance of his sister, Alison (Janaya Stephens). The truth is that the stranger is a member of a ruthless gang out to enlist his assistance to rob the bank where he works. Because of his brain disorder, Chris is gullible and easy pickings for a crafty crook like Gary.

Just as in Memento, the protagonist proves to be quite confused about his new pal’s motivations, especially since the guy’s got girls, including the irresistible and lovely Luvlee (Isla Fisher). Fortunately, despite his deficiencies, Chris never lost his moral bearings, a trait which usually enables any underdog to trump pure evil, at least at the movies.

Not nearly as successful a mind-bender as Memento, yet a perfectly praiseworthy homage to that inscrutable brain teaser.