Mayhem meets metaphysics, I kid you not, in The Invention Of Lying, a frantically fib-free odd couple marriage of muted British wit and Hollywood sitcom. And though rarely disappointing Ricky Gervais is on hand in an attempt to save the day, both as the co-writer/director with Matthew Robinson of this movie with an exceedingly risky premise and also the flustered main character, more often then not the truth hurts here, when this romantic comedy should simply be amusing the audience.

More a succession of subdued talky humorous moments and awkward raunchy punchlines than a solidly constructed story, The Invention Of Lying is about a small American town with a population thoroughly lacking the fib gene in their DNA. Which would appear to also make waterboarding an unnecessary measure, it goes without saying. And while this premise seems perfectly do-able, it’s a lot more complicated and problematic than you might think. Because the inhabitants also lack the ability to suppress whatever nasty or embarrassing ideas may be lurking in their heads. 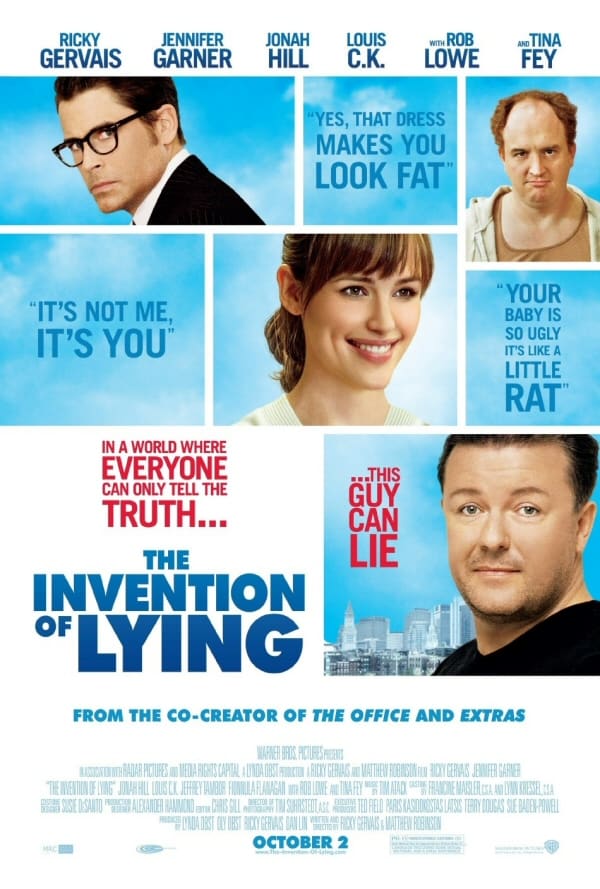 But the persecuted protagonist in work and love, discovers in an emergency and as the first human ever, when in desperate need of fast cash with his eviction looming, that perjury can come in handy. Because these loony locals, including bank tellers informed that there’s more money in one’s account than listed, robotically believe everything they’re told in a land with no lying. Which is perhaps a far more familiar concept to the offscreen audiences, indoctrinated to believe everything when routinely scammed by commercials and politicians, sorry to say, than this movie intended.

The story does veer without warning into what appears to be an entirely different movie, when Mark discovers that his immense power as the only liar in the world transforms him into a pudgy messiah captivating the entire population with his personal knowledge about the existence of God and heaven. Though The Invention of Lying is salvaged in part by mostly too-little-too-late multiple surprise cameos. Including Tina Fey as Mark’s bratty secretary; Philip Seymour Hoffman as a boob-obsessed bartender; and Superbad’s Jonah Hill who as a super-sized clinically depressed neighbor, confuses elevators with confession booths where he rants about searching online for suicide suffocation training techniques.

Though this whole movie nonsense about never telling a lie is not so new, and traditionally what film critics are all about. At least some of us.