In 1992, Mark Whitacre (Matt Damon) was a highly-regarded president of a division of Archer Daniel Midlands (ADM), an agri-business conglomerate headquartered in Decatur, Illinois. That was the same year he shared with his wife, Ginger (Melanie Lynskey), his misgivings about an international, price-fixing scheme he was helping to orchestrate on behalf of the Fortune 500 firm. Inside ADM, the company’s motto was “The competitors are our friends, and the customers are our enemies,” which explains why it had entered a conspiracy to inflate the cost of the processed food additives it manufactured.

Well, at his wife’s urging, Whitacre contacted the FBI which asked for his cooperation in building an anti-trust case against ADM and the other participants. He did agree to spy for the Bureau, which made him the highest level corporate executive ever to turn whistleblower. And over the next several years, he secretly gathered plenty of evidence, covertly taping hundreds of incriminating conversations with his colleagues.

During this period, he worked closely with FBI agents Brian Shepard (Scott Bakula) and Robert Herndon (Joel McHale) who never did an extensive background check on their potential star witness. These gullible gumshoes had no idea Whitacre would prove worthless in Federal court. 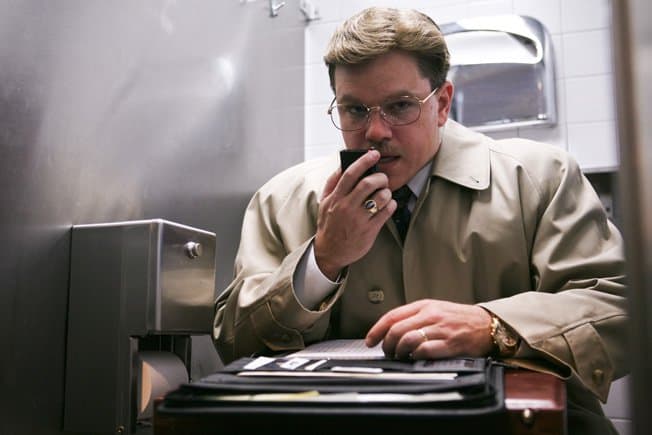 For while his credentials might have been legit, such as his degrees in biotechnology from Ohio State and Cornell University, other aspects of his life story were pure fabrication, such as his claim that he had been orphaned at three and subsequently adopted by a couple who owned an amusement park. Worse, it turned out Mark Whitacre was not only a compulsive liar with delusions of grandeur, but a manic depressive with suicidal tendencies.

Furthermore, at the same time he was spying for the FBI, he was defrauding ADM of over $9 million. The flim-flam left the Bureau with egg on its face and Whitacre ultimately ended up serving far more time in prison for that crime than any of the targets of the badly-bungled investigation.

Based upon the Kurt Eichenwald best-seller of the same name, The Informant has been adapted to the screen by Steven Soderbergh. Regrettably, the Oscar-winning director (for Traffic) saw fit to interpret what might have made a compelling corporate espionage thriller (ala Michael Clayton) into a lighthearted romp revolving around Whitacre’s cat-and-mouse relationship with the FBI’s incompetent Keystone Cops who served as his contacts, instead of focusing squarely on the pricing scandal.

Matt Damon seems an ill-match for his role as the mentally-unstable title character, a tragic-comic figure deserving of more complicated treatment than as an addlepated fuddy-duddy. Even more annoying is Marvin Hamlisch’s goofy, retro score which sounds like it was borrowed from a Sixties TV game show like The Newlywed Game or The Dating Game.

Sadly, what gets all but lost is the fact that, even in the absence of Whitacre’s ethically-compromised court testimony, the government was still able to get convictions of several top executives and to eradicate the financial chicanery in the agri-business industry. Rather, what’s served up is superficial, cinematic folderol leaving the impression that ADM was the innocent victim of a smear campaign by a larcenous loon who had taken leave of his senses.

To purchase a copy of the book The Informant is based on, visit: AMAZON

To see a trailer for The Informant!, visit: