This film has a powerful concept that has been watered down to become a very bad reality show. Like Survivor, there’s a progressive system of elimination but, instead of contestants voting off other members, they actually kill them. This may sound dramatic but, in the event, it’s not.

The country known as the United States has collapsed and it is now known as Panem. It’s split into 12 Districts and ruled by a government known as Capitol. 74 years before, the peasants of Panem rose up against their austere rulers but, tragically, their rebellion failed. Their surrender terms dictate that every year each District send one boy and one girl to appear in a televised event called “The Hunger Games.” These 24 children have to fight to the death and only one child is allowed to survive. The participants are selected by lottery and, when 16-year-old Katniss’ (Jennifer Lawrence) young sister is chosen, Katniss volunteers to go in her place. 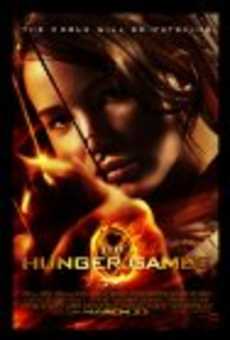 When this film starts, it fails to set up a sense of time and place. At first it feels as if it’s the middle-ages, with peasants living in hovels and hunting wild prey for food. The arrival of Effie Trinket (Elizabeth Banks), a 19th Century Lady Gaga, changes the tone and, when the participants are put on a train with a dining car, it feels bizarre. The government headquarters are essentially futuristic but most other things are present day and, after a while, it all seems like a potpourri with a strange smell.

When the participants are chosen, they are virtually being condemned to death, yet none of them show as much as a modicum of resentment towards their murderers. They are all polite, and compliant, and when they get told off for not putting their best foot forward, they are fawningly apologetic. This is not how we want our heroes to behave, and witnessing their subservience becomes rather tedious after a while. It’s hard to route for someone who has no desire to route for themselves.

The audience is told that this ‘fight to the death’ will be played out in an arena, which conjures up visions of ancient Christians being fed to the lions. However, in the event, the arena is a forest, the game lasts for days, and the tension is at zero. While the Romans are not to be admired for finding entertainment in humans having their flesh torn apart by lions, at least it shows they had a sense of drama.