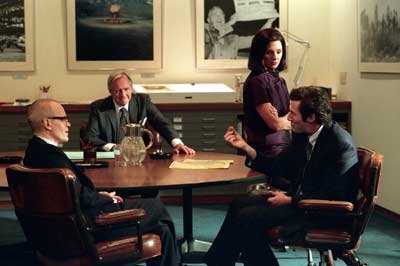 Clifford Irving (Richard Gere) was a virtually-unknown writer who had previously published a half-dozen underappreciated novels when, in 1970, he decided to pass off his next work of fiction as an authorized memoir of one of the most famous people on the face of the Earth. Because Howard Hughes (Milton Buras) had not spoken to the press in over fifteen years, Irving was banking on the idea that the reclusive billionaire would not even break his self-imposed silence to denounce the book as a complete fraud.

So, collaborating with Richard Suskind (Alfred Molina), another struggling author with felonious intent, Irving duped McGraw-Hill into believing that the eccentric hermit had actually cooperated in the creation of the bogus biography. The book company coughed up close to a million-dollar advance, with the bulk of the money coming in a check made out to “H. R. Hughes.” That was cashed in Switzerland by Irving’s fourth wife, Edith (Marci Gay Harden), who simply endorsed it with the sobriquet “Helga R. Hughes.”

Still, since nagging suspicions about the manuscript continued to haunt the project right from the start, the brazen con men found themselves having to rely on an increasingly elaborate ruse to silence the skeptics. And the pair might have managed to pull it all off, had Hughes himself not finally decided to collapse their house of cards by making his first public appearance in ages to expose them as charlatans.

Now the entire scheme has been revisited by The Hoax, an intriguing, character-driven drama directed by three-time, Oscar-nominee Lasse Hallstrom. 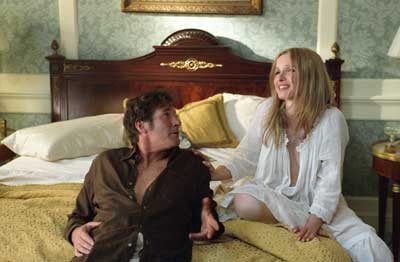 Curiously, the gifted Swedish director decided to adapt his film from the self-serving confession of the same name published by Irving back in 1972. Consequently, the disgraced ex-con, is depicted somewhat sympathetically, less as an inveterate liar and shameless womanizer than as a cagy prankster and carefree bon vivant who stole to be able to afford the finer things in life, ala the similarly self-indulgent protagonist of Catch Me If You Can.

Richard Gere is at his best in years, here, turning a remorseless lout into an almost likable underdog. Meanwhile Alfred Molina is equally-effective in his capacity as Irving’s clumsy, conflicted co-conspirator. Also of note are Oscar-winner Marcia Gay Harden (for Pollock) who virtually disappears into her role as Irving’s humiliated spouse; Julie Delpy as his socialite mistress, Nina Van Pallandt; Hope Davis as his exasperated agent, Andrea Tate; Stanley Tucci as irascible McGraw-Hill executive, Shelton Fisher; and Eli Wallach as former Hughes confidante, Noah Dietrich. Hallstrom must be credited for coaxing so many quality measured performances out of another top-flight cast, a trademark feat which in the past resulted in Oscar nominations for Juliette Binoche (Chocolat), Judy Dench (Chocolat), Michael Caine (The Cider House Rules) and Leonardo DiCaprio (What’s Eating Gilbert Grape).

Though worthwhile for its capably-executed, beguiling plot alone, The Hoax also earns high marks for the painstaking effort the production made to recreate the ambience of the early Seventies, thereby magically transporting the audience back to that bygone era. Still, make no mistake, it is Irving who gets the last laugh, after all is said and done, by resurrecting his image courtesy of this empathetic bio-pic.