If you ask most people to name teachers in their lives who inspired and transformed them in essential ways, they might be hard pressed to come up with even one. But for the students of segregated, historically black Wiley College in 1930s Texas who faced the dual ordeals of Jim Crow terror and the Great Depression, their debating coach Professor Melvin B. Tolson not only nurtured their talent and self-esteem, but was a miraculous force in their lives that led them to engage as dynamic participants in the future Civil Rights Movement.

That key figure in their young lives, Professor Tolson, was a regrettably unsung yet major African American cultural figure in the mid-20th century. Now Denzel Washington and Oprah Winfrey have collaborated as producers to bring this extraordinary docudrama, The Great Debaters to the screen, and it’s the best historical epic feature this year. The scope and breadth of this magnificent story touches profoundly on the multiple social and political layers of the time, while also spotlighting the tenderly conveyed coming of age venture of a precocious, eager young 14 year old college student James Farmer (Denzel Whitaker), who would later be immortalized as CORE founder and Civil Rights Movement major player. 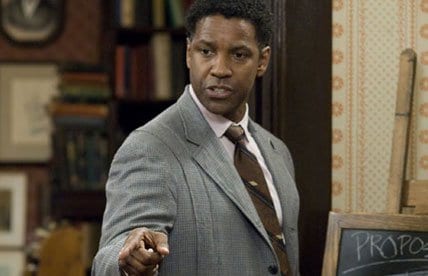 Denzel Washington, who needs no further proof that he’s as formidable a talent behind as well as in front of the camera, combines the best of both worlds as the star and director of The Great Debaters. As Tolson, he not only mentors his students to a surprise championship win against the white Harvard team (it was actually the University of Southern California), but moonlights as well in extreme danger as a militant underground labor organizer uniting black and white oppressed sharecroppers against the rich farmers. Denounced and ostracized as a communist for his labor activities, even while under a grave threat during a period of widespread lynchings, Tolson fearlessly prevails.

In Denzel’s more than capable hands as an emotional and dramatic storyteller, there’s a real organic sense of how young minds can be nurtured and energized way beyond sex and sports, into caring and socially committed, evolving human works-in-progress. And how debating can be pretty exciting on screen too, after all. There’s also an illuminating subtext here, of how the impetus for constructive social change and dedicated opposition to both racial and political prejudice and intolerance can be passed on as potent legacy from one generations to another, and make this a far better nation for it. A Hollywood happy ending embracing history.