When Stallone, Schwarzenegger, Willis and Rourke are on screen they are clearly having a blast. The trademark Stallone dialogue rolls off their tongues as they tower over their roles with a can-do air that makes it very tongue-in-cheek and it’s hugely entertaining. But, unfortunately, there’s nowhere near enough of it and it’s unsettling to flit from satire to deadly action; we can only go one way and the former makes it hard to take the latter seriously. Sly hints that this could be his action finale and, although it isn’t a worthy goodbye, it’s an entertaining romp and it would be a shame not to catch those biceps just one last time. 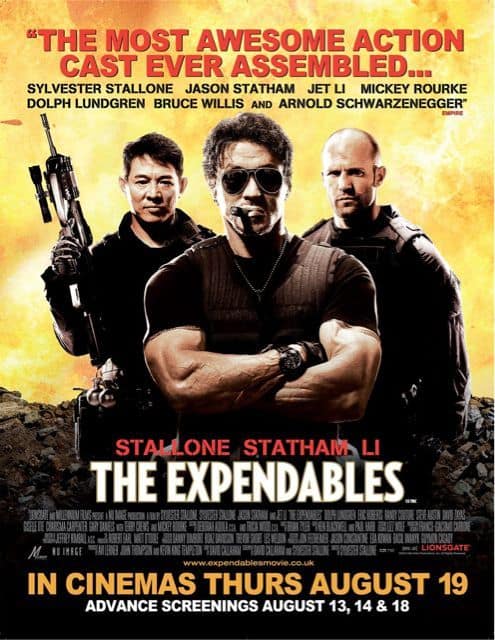 The film starts well, with battles and characters cleverly interwoven, but the ensuing action, and there’s a lot of it, is just a series of car chases, shoot outs and explosions, which we’ve seen a million times before and doesn’t justify calling it a ‘thriller’. Special effects aren’t thrilling, they’re pretty; to be thrilled we need more.

Times move on and, at 64, Sly, thankfully, knows that getting the girl won’t work anymore, but instead of letting someone else have the honor, he fixes it so NO ONE gets her. How dog in the manger is that? Also, Schwarzenegger and Willis get dispatched early in the film with ungracious haste and poor old Rourke gets an even worse deal.

He was once, apparently, an Expendable but when Sly asks him to rejoin them for the next mission, Rourke says no and instead stays home to finish his painting by numbers, which isn’t the most macho thing I’ve ever seen. But I suppose if I was a make believe boxer, and a real boxer was in my film, I’d have a lot to prove, but making Rourke go all girly raises suspicions and there can be only one explanation.

It’s official – Sylvester Stallone is insecure. He’s bumping off the competition, keeping all his girl action platonic and taking wrestling lessons from The Rock, after promising him a role in his next film. What role that is, I have no idea, but I’m sure it won’t involve the world wrestling champ taking off his shirt and exposing that rippling body all the fans go wild for.