Documentary Chronicles the Death of Democracy under Bush

In the wake of the 9/11 attacks, the Bush Administration rushed the Patriot Act into law without giving members of Congress much of a chance to read the final draft. That repressive statute included many Draconian measures denying citizens an array of privacy rights previously considered sacrosanct. For instance, the government is now allowed to conduct wiretapping and electronic surveillance and to examine medical, bank and credit card records, all without a warrant or probable cause.

Observing how many similarities America has since come to share with Nazi Germany, award-winning author Naomi Wolf wrote The End of America, a chilling best-seller warning that the U.S. was in danger of becoming a Fascist state. This cautionary documentary is based on that book, and features Ms. Wolf lecturing with the help of video footage in a format reminiscent of Al Gore in an Inconvenient Truth.

But instead of talking about the dire state of the environment, her enlightening expose’ delineates the ten steps taken by dictators historically to destroy a democracy. A few of these include scaring the nation about both an internal and external threat; arbitrarily detaining citizens; creating secret prisons where torture is permitted; controlling the press; and treating political dissident as traitors. 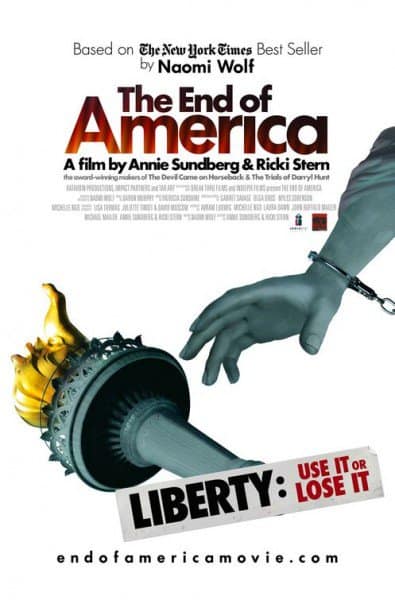 Wolf goes on to make a persuasive case that America came close to totalitarianism under the Bush/Cheney regime. However, the thing that undercuts the dire tone of her overall argument is the recent election of Barack Obama. If a Republican junta bent on world domination had permanently seized power, how do you explain that it is about to be replaced by a President promising to usher in a new era of openness and a return to respect for fundamental freedoms?

For the President elect has already indicated his intention not only to abide by the Geneva Conventions but to close down the terrorist detention center at Guantanamo Bay. So, it clearly looks like we have picked a new leader inclined to resurrect the essential elements of the nation’s democracy. Still, a further encouraging sign would be if Obama directs Congress to repeal the more oppressive aspects of the Patriot Act soon after he enters office.

In sum, The End of America is a worthwhile film to the extent that it can serve a permanent watchdog function as a reminder of the possible erosion of Constitutional rights and the citizenry’s need to remain vigilant about the tendency of power to corrupt, and of absolute power to corrupt absolutely.

To see a trailer of The End of America,