Mel Gibson might be looking a little long in the tooth, but he hasn’t lost a step in terms of his acting chops, judging by The Edge of Darkness, a remake of the 6-hour BBC mini-series of the same name first broadcast in 1985. The setting has been shifted from Britain to Boston, where the film unfolds in a fashion similar to such samples of the emerging gritty, Beantown-based crime genre as Mystic River (2003), The Departed (2006), Gone Baby Gone (2007) and What Doesn’t Kill You (2008).

This saga starts with the murder of a veteran homicide detective’s daughter right in front of her father. 24 year-old Emma Craven (Bojana Novakovic) was a recent MIT grad with a promising career doing scientific research for a company called Northmoor when she was shot to death in the doorway of her dad’s home.

Initially, everyone assumes that Thomas Craven (Gibson) was the intended target, since he was standing next to Emma at the time of the drive-by. And, in true Dirty Harry style, Tom opts to go rogue when his boss tries to take him off the case. 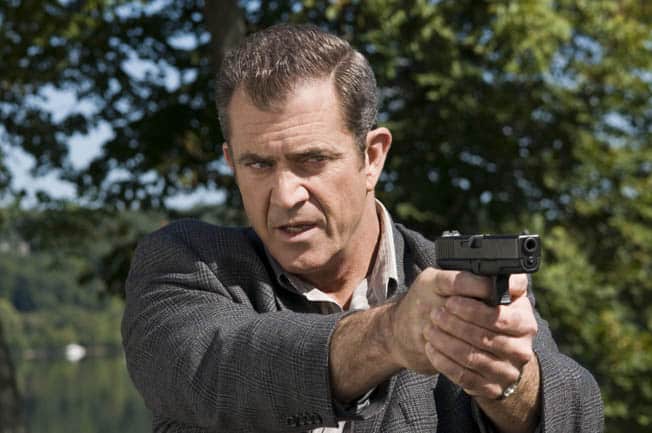 Craven soon discovers that something is suspicious when a lock he saved of his late daughter’s hair sets off a Geiger counter. The search for more clues about how she might have become exposed to highly radioactive material,leads to her job at Northmoor Corporation which was secretly involved in some shady nuclear defense contracts with the U.S. government.

As it turns out, Emma is just the latest in a string of activist whistleblowers to end up the unfortunate victim of a state-sanctioned hit. But with a U.S. Senator (Damian Young), a CIA Agent (Ray Winstone) and Northmoor’s CEO (Danny Huston) all collaborating to cover-up the killings, it looks unlikely that Craven will be able to crack the conspiracy.

Directed by Martin Campbell who also handed the original TV version, The Edge of Darkness is a political potboiler/revenge flick featuring an uneven mix of hokey sentiment (ala the ghost of Emma intermittently appearing to daddy) and two-fisted fare (ala Gibson kicking butt). Not surprisingly, the latter works, the former doesn’t, although it never gets so sappy as to undermine the overall effort.

A cross of The Lovely Bones and No Way Out, only in Bostonese!

To see a trailer for The Edge of Darkness, visit: