While nutty screen behavior in horror movies may have been done to death, so to speak, when served up with a stylish makeover from the esteemed vaults of classic gore guru, George Romero, there’s likely to be a freshly provocative twist on all things creepy and deranged. Which is quite the case and more with Breck Eisner’s The Crazies, a Romero remake revisiting the 1973 lunatic epidemic yarn that impressively delivers murder with a message, and a dash of twisted humor too.

Executive produced by Romero and co-written by Scott Kosar (The Amityville Horror, The Texas Chainsaw Massacre), The Crazies plays out in heartland farm country beginning on a typical balmy spring day, when a baseball game is interrupted by an unassuming resident suddenly turned depraved shooter. Soon the town is sent into a panic by pillars of the community transformed into pyromaniacs and dazed psychos wielding pitchforks.

Desperate to sort things out in a hurry, when not on the run from assassins themselves, are Sheriff Dutton (Timothy Olyphant), his nervous deputy sidekick Russell (Joe Anderson) and Dutton’s pregnant wife Judy (Radha Mitchell). Who is also the town doctor, and weighs in on occasion with a sensible medical prognosis of the scary situation at hand. 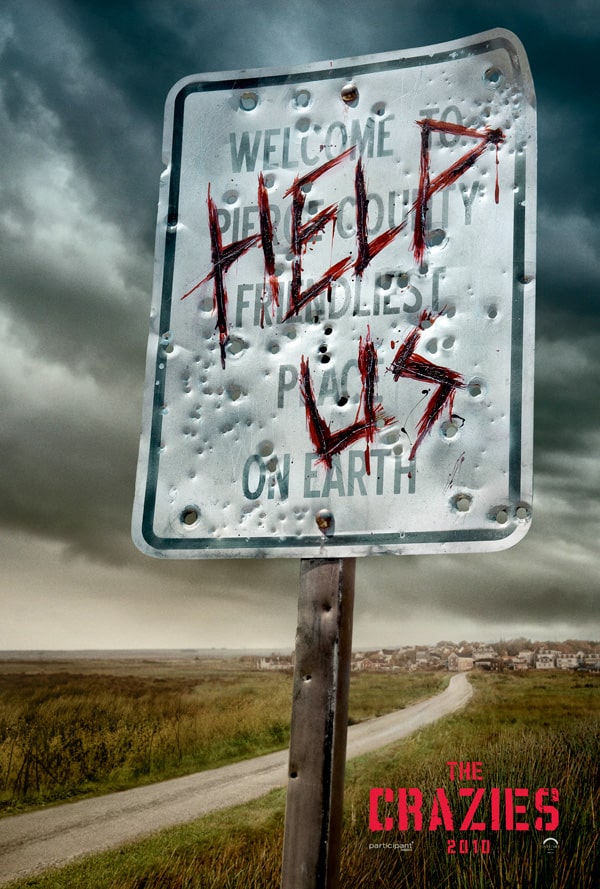 Suspicions eventually surface about a mysterious plane crash in the woods that has gone unreported in the media, and an ensuing possible contamination of the water supply that is zombifying the locals. Along with area politicians who refuse to condemn the water supply because it will bankrupt the farmers, and a US military that has inexplicably sealed off the entire community with a concurrent quarantine shoot to kill psychotic policy of their own.

The Crazies concocts all sorts of freaky fantasy situations, from a homicidal car wash and a steakhouse where the barbecue is human, to a little incidental law enforcement psychotherapy for soothing random raving maniacs, in an area with a likely shortage of shrinks that could have come in handy. And with a thinking man’s sobering script as well, that mulls timely extreme fears touching on toxin induced terrorists, weapons of mass destruction in domestic assisted suicide mode, government secrecy in collusion with news blackouts, a followup mass extermination just in case, and other anxieties that can drive you insane anyway. Pass the strait jacket.