If you saw Babel (2006), then you are already familiar with the complicated structure of The Burning Plain. For Guillermo Arriaga, who landed an Oscar-nomination for that picture’s screenplay, wrote this one, too, and makes his directorial debut here with another inscrutable ensemble drama.

The film features a couple of Oscar-winning actresses in lead roles, namely, Charlize Theron (for Monster) and Kim Basinger (for L.A. Confidential) At the point of departure we are introduced to Sylvia (Theron), the troubled manager of an upscale restaurant in Portland. Not only is she suicidal with self-inflicted scars to show for it, but she’s compulsively promiscuous.

It seems that the source of her angst is the checkered past which motivated her to move from New Mexico to Oregon in the first place. Courtesy of a vivid flashback, we learn how her married mother Gina (Basinger) had perished in a fiery propane explosion inside a trailer home which left her body fused to that of her Mexican lover, Nick (Joaquim de Almeida), a philandering father in his own right. 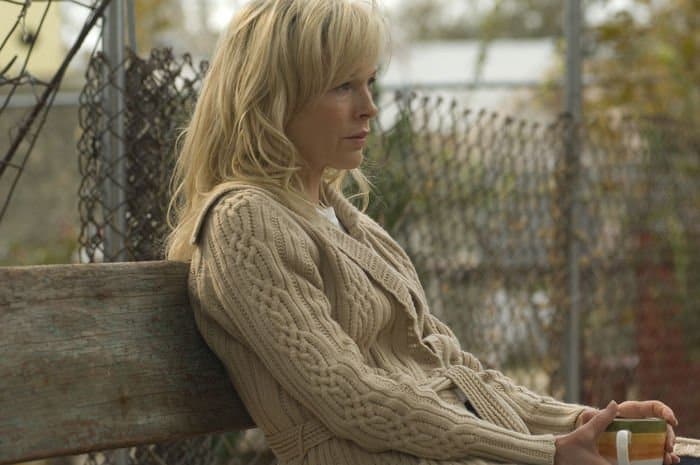 Apparently, the apple didn’t fall far from the tree, since Sylvia is currently embroiled in an adulterous affair with John (John Corbett), one of her employees.

But she also flagrantly sleeps around with customers, and when John gets jealous, she shuts him up with, “When you leave your wife, then you can talk.”

As the plot further unwinds, we see that the sins of the elders were visited upon their offspring when Nick’s teenage son (JD Pargo) seduced a daughter (Jennifer Lawrence) of Gina he met at her mother’s funeral. Their ill-fated liaison leads to an unwanted pregnancy and a host of other soap opera level tragedies like adoptions, patients in comas and plane crashes.

Your job as viewer is to solve the mystery of the underlying reason why while Sylvia unapologetically hops from bed to bed like a prostitoad in heat. A convoluted, cinematic jigsaw puzzle of Shakespearean proportions.