While eating disorders have reached epidemic proportions in this country, one type of freaky food fetish you’re not likely to hear about, is a preference for male versus female body parts of whatever is on the menu. Which is exactly the kinky kind of out-of-control appetite that the Diablo Cody penned movie Jennifer’s Body has in mind.

What’s all wrong here, is that this Megan Fox girl bonding and binging high school horror spree isn’t funny enough when it wants us to laugh, or sufficiently scary when it’s supposed to be. Sort of like diving into a buffet with way too many competing tasty tidbits to sample simultaneously. Though Megan’s teen fanboys should have their satisfied fill of her cannibalistic lust in full swing here, especially those who crave babes with bite.

Jennifer’s Body focuses in on what is not exactly just another dull night in the town of Devil’s Kettle. Mousy typical teen Needy (Amanda Seyfried) tags along after her best female friend, the fabulous high school hottie Jennifer (Megan Fox). Who is just dying, it turns out literally as well, to hear a cool rock band while making potential moves on the lead singer Nikolai (Adam Brody). 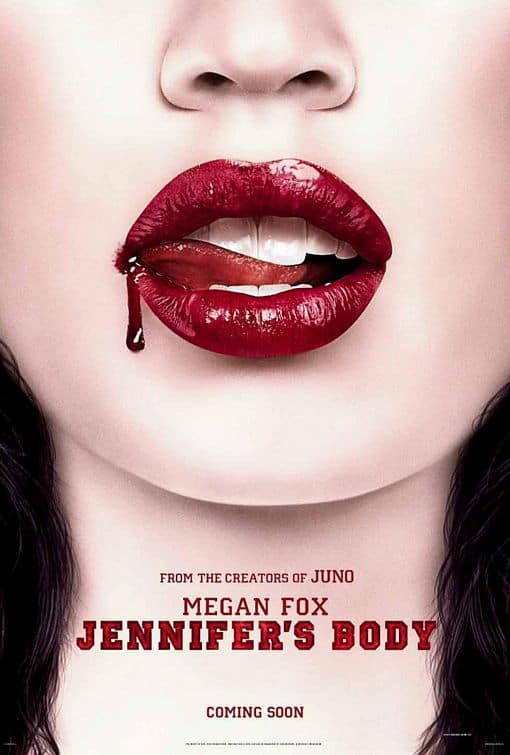 But when the seedy joint goes up in smoke in a disastrous fire, Jennifer is dragged off by the band to a ‘demonic transference’ via virgin sacrifice arranged with the devil, don’t ask. But the hitch is that Jennifer is no virgin, and she returns from the dead in a really mad, heterosexual get-even, watch out what you wish for rampage.

The biggest problem is not that Juno Oscar-winner scribe Cody brings nothing new to the table as horror movie maven, which she doesn’t. But that her gift for tangy teen screen gab is, sorry, just plain out of her league on gore turf. So in effect, these perpetually perplexed youth in this Karyn Kusama directed production aren’t the only ones in search of an identity they can call their own. It’s kind of like putting Judd Apatow in charge of your basic Disney movietoon.

So Diabo Cody may not have lost her uniquely gifted edge, but perhaps just wandered into the wrong genre, and she at least deserves the benefit of the doubt this time around. Though the verdict is that she needs to keep up her perfected tongue lashings, rather than guy gorging, when dabbling on the raw side, and stick to comedy. Seriously.