A combo terminal male bonding buddy road movie and a touch of perhaps Two Flew Over The Cuckoo’s Nest, The Bucket List teams up those two old screen pros Jack Nicholson and Morgan Freeman for this Rob Reiner directed bittersweet comedy about quality-of-life issues while defying doctor’s orders in the extreme. The second movie this year weirdly delivering personal reflections from the afterlife following P.S. I Love You, The Bucket List is at its best when these two moody seniors spar with the Grim Reaper and one another. But the story falls flat with jarring effect when later making that ill-advised occult detour into seemingly another movie. 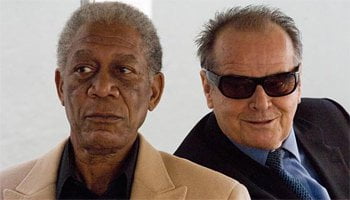 Jack Nicholson and Morgan Freeman are Edward Cole and Carter Chambers respectively, two jaded elderly gents with absolutely nothing in common who meet in a hospital room they share while being treated for terminal cancers. Each bears a long festering resentment that, when faced with imminent death, feels for both like they haven’t managed to live life to the fullest in the interim.

Though the over-the-hill surly sex machine billionaire Edward has never lacked for material possessions and quickie romance on demand throughout his party hardy life, genuine people relationships, especially with an absentee estranged daughter, have been sorely lacking. And Carter for his part, has suffered in silence for the long haul, as a frustrated woefully underachieving black man with a brilliant mind, forced to toil as a garage mechanic instead of his dream of being a professor, in order to support his children who came early in life, and subsequently bearing repressed resentments towards his wife through the years.

At the same. time, fed up with the routinely humiliating cancer treatments at the hospital that Edward also happens to own and that threaten his overblown sense of masculinity, he pesters Carter to run away with him for some globe-trotting final excellent adventures together in order to “go out with balls.” That is, before they both kick the bucket referred to in the film’s title, while trying their hand tackling that terminal to-do list as thoroughly as possible.

No Grumpy Old Men these two, Carter gets into tour guide mode as a specialist with a vast knowledge poured into detailed trivia covering just about anything there is to know, while Edward spreads his buoyant, though at times tacky joie de vivre as he picks up the tab for jaunts around the world from the Pyramids to the Taj Mahal. But these two party animal elders into deep denial about their fatal ailments, are brought back down to planet earth by occasional jolts of rude reality checks connected to their bouts of bad health.

Though steeped in the collective chemistry of these two charismatic stars whose cranky characters essentially save each others’ lives before the curtain comes down, the problem with The Bucket List is that their messy and complex predicaments get resolved far too simply to reflect the world the rest of us get stuck living in. As opposed to that usual Hollywood spin version of reality for dummies up on the screen.