With writer/director Rian Johnson equating con men with storytellers as a prevailing theme in The Brothers Bloom, you get a pretty good idea about what’s in store, from the starting gate. A flippant, bordering on terminally silly tall tale about two sibling confidence men perfecting their hustle since childhood, The Brothers Bloom defeats its own elaborate narrative scheme by failing to take itself seriously when ensuing dramatic events scream for it to do so.

Finding themselves stuck in the director’s far too dizzily hatched plot in more ways than one, are Adrien Brody as Bloom and Mark Ruffalo as Stephen, two frequently recycled bratty foster kids in childhood who act out their resentment as orphans by hoodwinking their ‘playground bourgeoisie’ playmates. When they reach manhood, Stephen emerges as the hyper alpha male of the pair, concocting lucrative international ripoffs of gullible human targets. While the more passive, disheartened Bloom resigns himself to basically not having a life of his own, as a mere character in his brother’s cunning scripts.

When Bloom has had enough and announces that the next con will be his last, he surprises himself by falling in love against his better judgement, with the new female victim, Penelope (Rachel Weisz). She’s a filthy rich eccentric Jersey epileptic hermit heiress who’s apparently never been kissed, but has her libido activated by surprise whenever lightning strikes. Once she’s hip to the fraudulent brothers, but without realizing she’s the mark, Penelope insists that she be allowed to join them on their latest globetrotting heist, as an exciting new adventure in her rather dull pampered life. 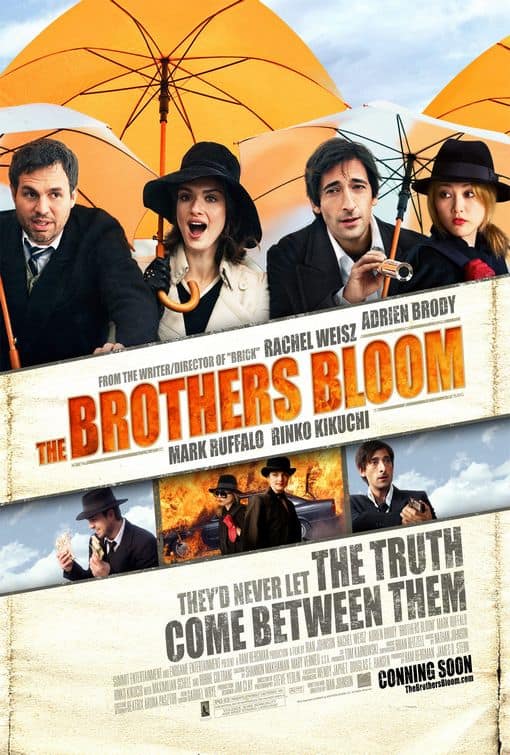 The peculiar hook here, apparently for both the scheme and the yarn as it unspools on screen, is Stephen’s highly unrealistic wild dream to come up with a con so perfect, that everyone gets to have a happy ending, even the victims. Sorry to say, at least as far as this movie goes, it’s just not happening. Unlike the fraudulent brothers, the filmmaker just can’t seem to mastermind a story that ropes the audience in, so distancing, terminally cute and facetious is its execution, that the actors come off more like showoffs than convincing characters.