In a match not exactly made in heaven, the fourth installment in the Bourne series, The Bourne Legacy, seems to boast something old, new, borrowed and blue. Well, not exactly blue, though on occasion. Rather, green. As in little green pills competing with bullets, that move the not always breathless pace of this Bourne along.

And depending upon audiences preferences in cooking up an action thriller, those who prefer a story with more narrative bite taking center stage over constant chase and crash choreography, brains over brawn, will likely be pleased with Bourne screenwriter Tony Gilroy taking over the directing helm this time around. Though what exactly is going down behind Washington DC closed doors for the duration, often appears to decidedly make more sense to the armchair sleuths in charge, than anyone else. 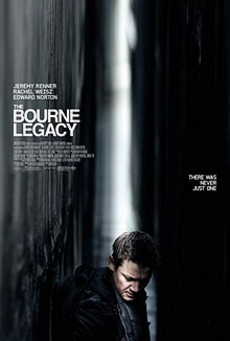 That said, movie reviewers everywhere casting a critical eye on the proceedings at hand, take heed of the cautionary opener. Yes, you. Because way before newly minted action hero Jeremy Renner as Aaron Cross actually jumps into the fray, an investigative reporter for that pesky alternative UK rag The Guardian – who is about to expose what a private military contractor operation in cahoots with the CIA is up to illegally – gets hastily dispatched to the afterlife by a bullet to the head in the London tube. Just joking, perhaps. Nothing like a little sidebar black humor injected into a grim espionage tale.

And speaking of injections, there’s plenty of that going on in The Bourne Legacy. It seems that the covert operatives in the field have been physically and mentally enhanced by regularly shooting up a genetic cocktail developed in a top secret pharmaceutical mega-corporation. Supposedly when the lab is not engaged – strictly off camera – in enriching itself off a US population turned into controlled substance junkies for profit.

Anyway, assigned to administer the ‘chems’ to the inducted mercenaries – or whoever they are and what they’re supposed to be up to, which is not exactly clear – is nervous egghead lab physician, Dr. Shearing (Rachel Weisz). But with a Congressional investigation looming into all these suspect medical machinations, the head spies charged with feverishly plugging up leaks under the malevolent direction of ruthless superior Retired Col. Eric Byer (Edward Norton), engage in killing off the operatives to conceal any evidence. And, whether death by drugs or attack drones.

The toxicological yakety yak delivered at rapid fire verbal banter throughout will likely fly over audience heads along with the bullets, except for those in the theaters with advanced medical degrees. But with at least one dynamically executed scene in store, when the doctor finds herself in a compromising situation where the usual bedside manner just won’t do.

And, while a tepid love triangle radically redefining the doctor patient relationship seemingly ensues between Weisz, Renner and his chems. Giving a whole new meaning to the notion of action thriller shoot ’em ups.