Aniston and Butler Square-Off in Battle of the Exes Romp

Milo (Gerard Butler) and Nicole (Jennifer Aniston) were only married a few years before they went their separate ways, basically because he was such a pompous jerk. Nothing much has changed since, except that he’s no longer a cop in the NYPD, having been fired for the same sort of immature behavior that cost him his marriage.

Nowadays, he plies his trade as a bounty hunter, rounding up fugitives from justice for Sid (Jeff Garlin), a bail bondsman who hates the idea of losing any of the money he’s posted for the assorted miscreants who’ve asked for his help. Milo has no reason to believe that his ex might be one of his boss’ clients; after all, she’s a very successful, investigative journalist who’s never landed on the wrong side of the law. 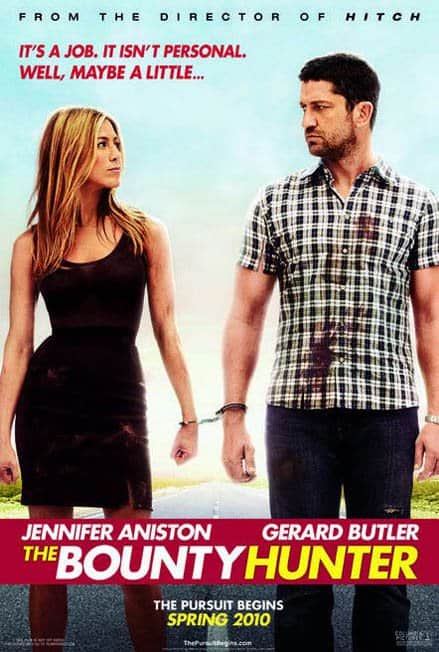 But she did get arrested for ignoring a pile of parking tickets, and then relied on Sid’s services to get out of jail. However, she subsequently failed to show up in court, and Sid currently finds himself facing the prospect of losing the $50,000 he put up as collateral.

So, Milo gets the shock of his life when he opens the file the Friday he learns that his latest assignment is to track down Nicole by Monday morning. Of course, this proves easier said than done, since he still has feelings for her and would rather reconcile than send her up the river. On top of that, she’s currently close to cracking the case of the mysterious disappearance of Jimmy (Adam Rose), the bartender at a local haunt named O’Doul’s.

The evidence that something’s amiss is that his car’s windshield is smashed. Nicole passes herself off as Jimmy’s girlfriend, Lakeesha, to slip past his suspicious landlady (Jayne Houdyshell) in order to snoop around his apartment for more clues.

As it turns out he might have been a stool pigeon who made enemies of the mob. However, before Nicole has a chance to get to the bottom of the story, guess who shows up and places her in handcuffs.

What ensues is a battle of the exes/Mafia comedy which fails to do justice to either genre. For it’s never really established why Nicole would want a Neanderthal like Milo back, nor is the missing persons whodunit the least bit compelling. A romantic comedy with no chemistry between the leads, and a crime caper with no tension, adds up to a deadly combination to be avoided at all costs.

A great time killer for anybody who needs help being bored.