You should only go to see The Book of Eli if you’re sure Denzil’s charismatic presence will carry you through a plethora of stereotypes and a dreary storyline too lazy to make even an attempt at a twist.

This film claims to be an action drama but is more like a costume melodrama with quite a lot of blood and a penchant for insulting its audience’s intelligence. Do we really need the first hour to be in brown and white with thunderous skies overhead to make sure we know that things aren’t going too well? And do we really need the last fifteen minutes in full color with blue, sunny skies; to make sure we understand that things are now working out just fine? And just in case you miss who the villain is (Gary Oldman with pock marked skin, rotten teeth and a bad American accent) he is always accompanied by very loud ‘bad guy’ music. Puulease.

The back story of The Book of Eli is pretty vague. Apparently there was a very big flash and then a very big war, possibly brought on by the consumerist bonanza that we were feckless enough to start in the 20th century. After these two events most people and things got wiped out, but luckily one copy of the Bible was saved. Eli received an e.s.p. message that he should take the good book and go west to deliver it safely to an unspecified location. He walks west for the next thirty years, reading his book every day.

Apart from being a pretty stalwart hiker, Eli has special powers which enable him to overcome six thugs at a time using only a hunting knife and also make him impervious to bullets in the back. Eli’s goal to deliver his book is interrupted when the villainous tries to take it off him. Eli risks his life to keep the book safe and only gives it up to save the life of the young girl who decided to follow him after he turned down her offer of sex.

Unfortunately, at this point, we learn that Eli’s special powers don’t cover bullets in the abdomen and he buckles but, in his defense, he does take an exceptionally long time to hit the deck. But giving up the book is not the disaster it could have been because, fortunately, when Eli reaches his destination under those glorious blue skies, he is able to recount every word. He proceeds to recite the entire thing to someone who has hair like Merlin and, although there is a printing press on the premises, Merlin decides to take dictation in long hand.

Shortly after this Eli dies but the young girl he saved twice (the first time was with a bow and arrow) decides to return to the village she left to follow Eli. Apparently she is no longer afraid of the villain who stole Eli’s book because she now has Eli’s iPod. But there was no need for her to bother with the iPod because the villain’s leg is now infected by gangrene which will guarantee him a slow death and the book he stole was in Braille which he apparently can’t read.

I don’t remember Eli ever reading in Braille but if you’ve got special powers you probably don’t need to use your fingers at all. Along the way we are fed biblical connotations which include a twiggy tree behind Eli when he gets shot which could symbolize a crucifix or possibly a post-fire bush. Either way, it doesn’t work. 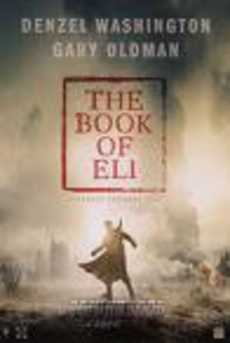 As well as all of the above, a few other things are bothering me. If Eli has been walking for thirty years, this film must have been set around about 2040, which makes me wonder why the relics of the past, that is, 2010, include net curtains, oil lamps, a Series 3 Volvo estate and circa 18th century clothes. And why hasn’t anybody fixed anything? All those years and no one has so much as picked up a brick. We may well be the generation of excess but you can bet your 3G iPod that whatever apocalypse might befall us, within twenty four hours we’d have got enough cell phone towers up and running so we could at least update our Facebook.

And, finally, I have a question for the Directors. How come amongst all that devastation, everyone, including Merlin, managed to have kept a very nice pair of Raybans for themselves? I sincerely hope this isn’t a starting point for another consumerist bonanza as I don’t think anyone will want to repeat Eli’s tortuous journey, no matter how good they think the book is.