Rare is the experience of big screen storytelling that can lure us into amazing new worlds, and yet feel as familiar and authentic as what exists all around us. The Black Balloon is just that kind of film, an Australian family drama that feels so real, that one might easily mistaken it for a documentary.

Written and directed by Elissa Down, The Black Balloon is the story of suburban Sydney teen Thomas (Rhys Wakefield), struggling to navigate the dreaded, turbulent waters of adolescence while dealing with an agonizing situation at home. His older teenage brother Charlie (Luke Ford) is profoundly autistic, and delights in behavior like roaming the neighborhood in his underwear giggling loudly, breaking into neighbors’ homes to urinate in their toilets uninvited, or showing up at his brother’s school to cause a riot and make his sibling the butt of ridicule.

And while Thomas is torn between caring for and protecting the mentally disabled Charlie, who veers between charming and scary, and pretty much smashing his face in, the bountiful love of his very pregnant mother Maggie (Toni Collette) compensates a good deal of the time for his frustration and emotional pain. Complicating matters even further is Jackie (Gemma Ward), a striking, lonely motherless coed at school who wants to both be his girlfriend and hang out with his family, no matter how dysfunctional, to compensate for the one she doesn’t have. 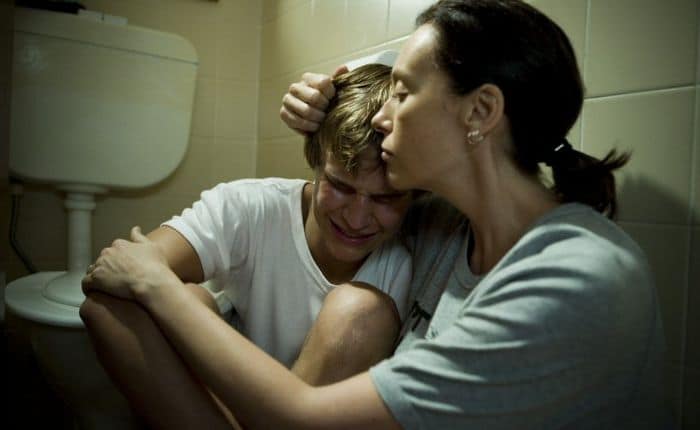 The Black Balloon is such a gracefully conceived film, yet crafted with a raw, unflinching honesty exploring the simultaneous sorrow and joy that define severe family afflictions. Though one wonders at moments if home is the best place for Charlie, who must be kept restrained under lock and key much of the time, when not a danger to himself and potentially to his newborn sibling. The cast is simply superb, and filmmaker Elissa Down has apparently reached deep inside herself to grace this story with an uncommon and stunning emotional truth, having grown up in a home with two autistic brothers.