This is a story about seven senior citizens who uproot themselves from their homes in the UK and head for a retirement hotel in Jambai, India. It’s a concept that is rich in fish-out-of-water scenarios, and offers endless opportunities for strangers to clash, while living within the confines of the same four walls. Unfortunately, however, these conflicts are all by-passed and, instead, individual story strands take a leisurely stroll around a city so lacking in ambience, that it doesn’t feel like India at all.

The seven travelers are all middle-class Brits. Evelyn (Judi Dench), has been recently widowed; High Court Judge Graham (Tom Wilkinson) has just retired; Madge (Maggie Smith) is going to have a hip replacement; Douglas (Bill NIghy) and Jean (Penelope Wilton) have lost their life savings; Muriel (Celia Imrie) is looking for a rich man and Norman (Ronald Pickup) is looking for romance. When they arrive at The Marigold Hotel, they discover that the owner, Kapoor (Dev Patel), has photo-shopped pictures of his crumbling, bankrupt accommodation to make it look like the luxurious hotel it’s not. 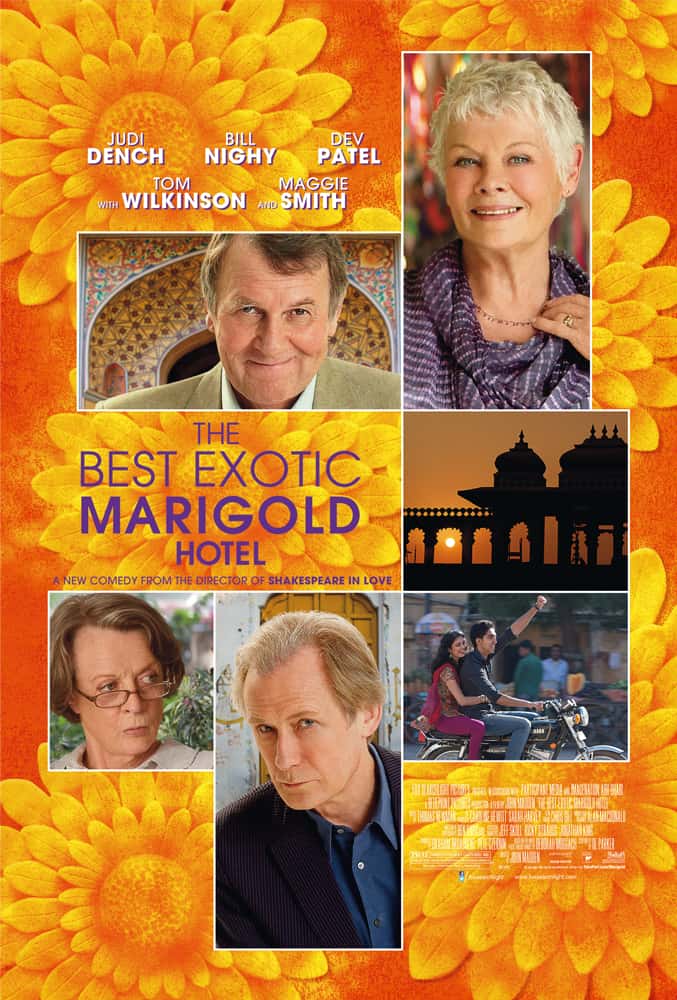 Apart from being incredibly uninteresting, none of the characters actually have a sound reason for being at The Marigold. Evelyn has never worked but, at the age of 77, flies to India in the hope of finding a job in a call center. Graham, the retired judge, might well take a long-haul vacation, but he’d be staying at the Delhi Hilton, not a bargain basement flea-pit. Madge has to be in India, but would be convalescing with other patients, and not holed-up somewhere that doesn’t even have a working telephone line. Jean hates India before she even gets there, and her husband is completely hen-pecked, so neither of them would have made the decision to make a trip to this particular foreign land.

Attempts are made to set-up individual storylines prior to leaving the UK, and what isn’t covered before is delivered later through clunky exposition at inappropriate moments. An example of this is when Graham waylays Evelyn, who he barely knows, and takes her to his room so he can make a confessional speech about a gay relationship he had when he was 18. It all becomes even more unlikely when the buttoned-up Jean, who’s been married to Douglas for 40 years, follows Graham to a local bar and promptly hits on him. Her uninhibited advances come from nowhere and feel as contrived and out of character as Graham’s candid response. No one acts like this, particularly the Brits, whose national emotion is embarrassment. And I should know. I am one.

Little is done to develop the characters so, when the finale finally comes, there is nothing to mine. Bad people suddenly become good, unreasonable people suddenly see sense, and the hotel’s financial problems are suddenly resolved by an 80-year-old who has suddenly become computer savvy. Convenient resolutions are piled on top of more convenient resolutions, until everything ends up in one almighty car crash. To top it all, we then have a very stout Dame Dench riding off into the sunset on the back of her balding boyfriend’s scooter.

Happy endings are always welcome, of course, but senior romances need the same magic as all others, and they also need to be visualized in a way that prevents the audience from cringing.