While all the grownups involved in the current Miley Cyrus scandal are being nagged big time in the media, filmmakers engaging in far worse behavior with minors in their movies that might suggest being led away in handcuffs, are getting a total free pass. And there’s no more repugnant example out there right now, than The Babysitters.

Writer/Director David Ross lets it all hang out when it comes to intimations of pedophilia fantasies, and shrewdly has theater audiences pick up the tab. Sam Waterston’s offspring Katherine (What gives, Sam?) stars as Shirley, a suburban high school babysitter and shy virgin who has an enormous crush on the kid’s dad, Michael (John Leguizamo). Taking advantage of the vulnerable teen’s infatuation while suffering through what seems like a mild case of midlife crisis, Michael lures Shirley into an affair. 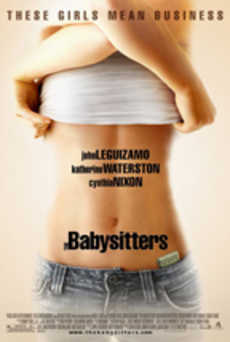 Meanwhile, Cynthia Nixon’s belittling, frigid spouse, in stark contrast to her Sex And The City seductress, seems to be kept around by the director to provide the perfect excuse for hubby’s statutory extramarital indiscretions. (Of all the actresses in the world, Sex And The City’s sexaholic, Cynthia Nixon?). And while professing his love for the smitten young girl, Michael at the same time establishes deplorable boundaries in their relationship, suggestive of a simple transaction of sex for sale, by presenting Shirley with ever increasing big sum babysitting tips following each lurid encounter in his car while driving her home.

And rather than experiencing the devastating broken heart of any typical teen, Shirley is more turned on by the satisfaction of the financial rewards. She is soon setting up a lucrative, under the radar, extra-curricular brothel at her high school, and pimping out eager coeds in bossy, efficient style to lewd neighborhood dads.

The Babysitters is a pathetic excuse to trot out a procession of teenage girls in the raw, performing graphic simulated sex acts with your basic suburban family man drooling all over himself. Going home and taking a hot, soapy shower after viewing, is highly recommended.