This is a story about an 18 year-old boy who doesn’t want to do his homework and doesn’t know what he wants to paint in his art class. Stakes don’t get much lower than this and it’s as crashingly boring as it sounds, with a lack-luster plot making its meandering way from one pointless moment to the next.

George (Freddie Highmore) lives in a middle-class household with his mother and step-father, has his tuition fees paid for by his father and spends most of his time sketching. Although George is bright enough to succeed with his studies, he has failed to do any homework for a year and, even though art is his favorite subject, he is angst-ridden because he doesn’t know what he wants to paint on canvas. He is befriended by Sally (Emma Roberts, niece of Julia), a fellow student, and mentored by Dustin (Michael Angarano). 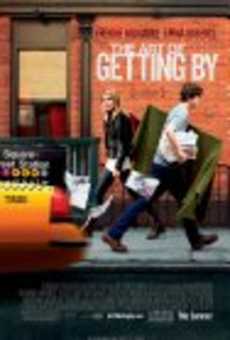 George lives a life more privileged than most and has a mother who clearly adores him, but none of this matters to our wishy-washy hero. He gets petulant at any inconvenience, an example of which is when he comes home to find the electric has been cut off. In response to his whines about not being able to use his computer, his step-father tells him to go to the local library or Starbucks, which is a pretty reasonable suggestion. But George gets sulky and struts off with his state-of-the-art Apple laptop as if the world is doing him a great injustice.

An attempt is made to create a love triangle between George, Sally and Dustin, which completely fails not least because all the characters are cliches and their actions make them all quite unlikeable. With so little to work with, the best finale the filmmakers can come up with is a graduation ceremony with George not knowing whether or not he has made it. This is hardly the stuff that drama is made of but as there has been no tension, no jeopardy and not so much as one exciting moment throughout the entire film, this was all it was ever going to be.

In a cinematic era when it is extremely difficult to get films made, it is startling that this non-story made it through the Hollywood war zone. It is the first film of writer/director Gavin Wiesen and as an IMDB search doesn’t turn up any big shots with the same last name as him, it could be the casting couch has become a casualty of the sexual revolution and maybe now it’s the guys who have to look in the mirror as they trim their nasal hair, and wonder if they’re the one who is going to be cast aside when the next desperate writer comes along. In this case, I hope it’s very soon.