This film is billed as a sports movie when in fact it’s a family drama and this split focus results in scenes that have no idea what they want to say, but take forever to say it. It’s a true story that’s been recreated for the screen so timidly that it has nowhere to go and ends up as a pile of sentimental slush from the first simpering smile to the final hammed up tear.

Steven (Aidan Quinn) and Maryanne (Andie MacDowell) have four children. Their youngest son, Luke (Stefan Guy) is killed in a car accident and his organs are donated to save the lives of five people. Luke’s elder brother, Jon (Ryan Merriman) is a gifted football player at Wake Forest University and decides to honor his brother’s memory by dedicating the team’s 2006 season to him. 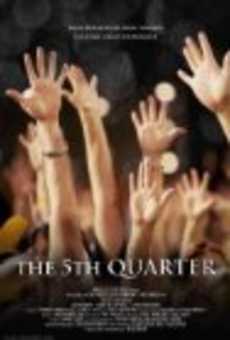 All the characters in this film are kind, thoughtful, loving and have the most amazing relationships with each other. They pay each other compliments, kiss and smile so much they sometimes seem borderline retarded. After the tragedy everyone stays the same but instead of smiling, they cry. It’s great that they all stay civil to each other when dealing with their pain but, unfortunately, that’s not something we can relate to. We only smile when we have a reason, and we sometimes snap at the ones we love because we’re not perfect, like those paragons of virtue up there on the screen.

This story flits from Jon, to Adam (Luke’s other brother), to the parents, to Jon’s coach and to the college football team, with nothing dealt with in depth and issues getting resolved in lightening quick time e.g. Jon gets over his excessive drinking and loss of drive when someone gives him a quick motivational lecture. Adam tells Jon he’s not sure he wants to go to law school, then in the next scene the grandfather tells Adam he must go, and that’s it. There is hope of a little tension when it looks like Andie MacDowell is turning into a lush but, unfortunately, after a quick hug and speech (“I’ve lost a brother, I don’t want to lose you”), she’s back on track.

There is, however, one part of this film when the characters’ behavior is questionable. Before one of the games Coach holds Jon’s hands and asks God to make sure he has a good game. Isn’t this a little self-serving, borderline sacrilegious? And if footballers can make personal requests to His Worship, why not second-hand car salesmen? They’re under a lot of pressure to make their targets every day and, as long as they promise to become better people if their prayers are answered, entire communities would benefit and not just a mere stadium of football fans.