To land on this 10 Worst List, a movie has to be more than merely disappointing. No, it must be walk-out bad, except that my job as a film critic is to sit there and watch it anyway, and simply be subjected to the torture. Sometimes, a film turns out to be so awful that it’s actually funny, but that doesn’t count as a miserable enough experience to warrant inclusion here. No, these flicks are the ones with no redeeming qualities which left me savoring this opportunity to get even.

Produced by BET, this ghetto-fabulous saga glorifies the sort of misogyny, materialism and black-on-black crime popularized by the network in gangsta music videos. The film marks the disgraceful directorial debut of Nicholas Harvell, who was undoubtedly aiming for the lowest common denominator by filling his inner-city splatter flick with so much gratuitous sex, violence and substance abuse, and so many expletives, ethnic slurs and scantily-clad women.

While this crude approach undoubtedly will earn the newcomer a certain street cred, if you know what I mean, most folks are apt to find the film relentlessly offensive. To give you an idea of what we’re dealing with, at the picture’s point of departure, the hero explains his dating philosophy with, “If you want a girl to know that you love her, [beep] her in the [beep] and [beep] on her” because “you have to make her your slut.” Charming.

A 21st Century version of Amos ‘n Andy which must have been financed by the Klan. 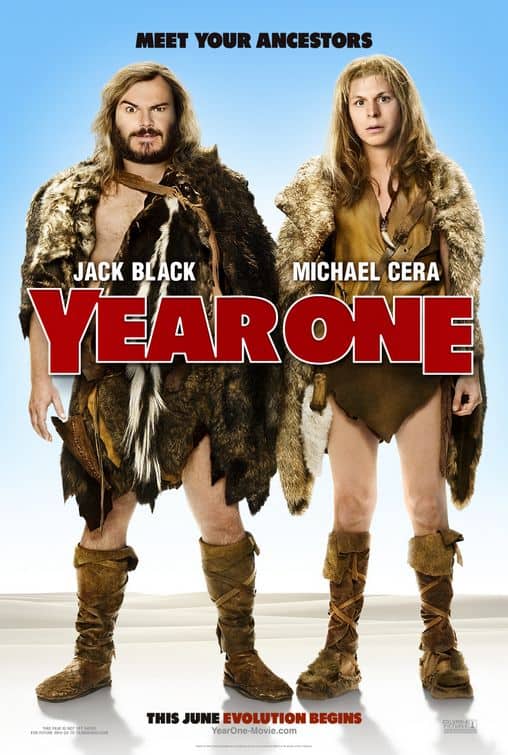 This sleazy caveman comedy is unfunny from beginning to end, starting with the moment when Jack Black’s character informs us that he’s slept with his own mother. But such behavior is ostensibly okay since he’s a Neanderthal, and so is his sidekick (Michael Cera), whose M.O. involves conking a woman on the head with a club to have his way with her.

What ensues is a cinematically-tragic mix of slapstick and bodily function fare, a horrifying insult to the intelligence, given all the big names connected to the project, including Bill Hader, Horatio Sanz, Hank Azaria, Vinnie Jones, Oliver Platt and that kid who played McLovin’ in Superbad.

Might not be Jack Black’s best film, but it’s definitely his worst.

Seth Rogen stars in this raunchy teensploit, a relentlessly-dark and disturbing celebration of depravity unlikely to resonate with any decent demographic. Director Jody Hill ostensibly decided to up the ante in terms of the shock genre’s profane, prurient and politically-incorrect index.

Most of the offensive antics involve the head of security (Rogen) at the Forest Ridge Mall where a lowlight includes an exchange between the foul-mouthed protagonist and a suspected terrorist named Saddamn Hussein (Aziz Ansari) during which they take turns yelling “[Expletive] you!” back and forth at each other dozens of times. But the movie’s most offensive moment has to be the chase scene featuring lingering, slow-motion shots of a flasher’s family jewels in all their glory.

I suppose this movie could’ve been worse. I’m just not sure how.

It looks like we might be witnessing the emergence of “The King of the Bad Black Movies” in Marcello Thedford, a prolific producer/director/scriptwriter/actor with a trio of godawful contributions this year. (See below) This cheesy, insult to the intelligence revolves around a stripper (Trina McGee) who reluctantly decides to hang up her g-string and pasties to run her brother’s (Thedford) beauty salon because he’s headed to prison.

What makes this movie so wrong how she complains about making less money as a hair stylist than sponging strangers of doing lap dances at $20 per pop.

The picture’s pathetic excuse for dialogue, such as(“Do you know how much business that booty brought in here? I am so proud of you,” was obviously improvised on the spot. And I noticed the phrase “up in here” being employed over 15 times before I decided to stop counting. Also popular with the verbally-challenged cast were the N, S, B and F-words.

But what’s most objectionable is Thedford’s seizing on any excuse to put scantily-clad women on display, whether they’re wriggling around a stripper’s pole, at the car wash (Don’t get wet!) or staging an impromptu fashion show in the ghetto. Heaven help us.

5. Street Fighter: The Legend of Chun-Li

In 1994, the popular computer game Street Fighter was adapted to the big screen as an incoherent concatenation of poorly-choreographed, martial arts action starring Jean-Claude Van Damme. Since the original bombed at the box office, one must wonder what might have prompted a studio to greenlight a sequel 15 years later, especially when the results turn out to be equally-abysmal. This unmitigated mess is a revenge-fueled affair featuring a series of clumsily-orchestrated fight scenes and sloppily-executed stunts.

As the butt-kicking heroine (Kristin Kreuk) sets about exacting a measure of vengeance, the epic battle of good versus evil is totally undermined by corny special effects and laughable trick photography. And to top it all off, this lame martial arts adventure even has the nerve to end on a cliffhanger, as if to set the stage for yet another sequel.

Destiny Charles (Millenia Gay) finds herself single for the first time in years after being unceremoniously dumped by her husband for a younger woman. Although the forty-something advertising executive is busy climbing the corporate ladder, she suddenly shifts her focus shifts from career to romance the day she accidentally crosses paths with Troy (Rich Paul), a handsome hunk half her age who introduces himself as a photographer.

Written and directed by the aforementioned Marcello Thedford, this no-budget soap opera is rather rough around the edges. The film suffers from second-rate lighting and sound equipment and from lots of love scenes where neither party appears particularly happy to be in bed together. Throw in all the profanity, a dumb blonde, dumber Asians, and a dubious denouement, and there isn’t really anything to recommend about this mediocre mess.

This ill-conceived teensploit focus on the plight of Eugene (Zach Cregger) a nerdy high school senior who falls down a flight of stairs and ends up in a coma. Much has changed by the time he comes around four years later to find his high school sweetheart (Raquel Alessi) naked in the current issue of Playboy Magazine.

Furthermore, Eugene learns that she’s no longer a virgin from a former classmate-turned-gangsta’ rapper who goes by the monicker Horsedick MPEG (Craig Robinson). The foulmouthed MPEG has catchy hit songs at the top of the charts with titles like “I’m going to [f-word] a white bitch” and “Suck my [d-word] while I [f-word] that [a-word]. One of the most reprehensible African-American characters in the history of cinema, he actually celebrates that fans were killed at his CD release party.

Even more disgusting is the scene where, upon learning that Eugene is still a virgin, he orders a sister (Tanjareen Martin) in his entourage to “Get in here and have sex with this dude.” Sadly, the attractive young woman obliges, only to die when an act of God intervenes. A relentlessly-offensive celebration of the debasement of females and the stereotyping of blacks as utterly depraved.

Diablo Cody succumbs to the proverbial sophomore jinx with this ill-advised attempt to imbue another title character with the identical, flip attitude as her previous one, Juno. Jennifer (Megan Fox) is a boy-crazy coed who loves to leverage her looks by making guys salivate over her while calling her competition crude nicknames like “Vagisil” and “Monistat” right to their faces.

But in this gratuitous splatter flick, Jennifer dies and is reincarnated as a man-eating cannibal. She spends the balance of the movie making major mayhem in the way of projectile-vomiting black bile and luring unsuspecting suitors into the woods in order to devour them alive. The film’s fatal flaw is that there’s not much of an arc to Jennifer’s character, for she remains as unlikable after becoming a zombie as she was before.

Megan Fox needs to set her sights a little higher now that she has some clout in Hollywood.

9. Keepin’ the Faith: My Baby’s Getting Married

Just because a sitcom is faith-based, doesn’t necessarily make it family-oriented fare. Case in point, this blackface version of Meet the Parents. With a plot that will surprise no one familiar with that Robert De Niro-Ben Stiller hit comedy, this flick also revolves around an awkward guy trying to win the approval of the father of the woman he wants to wed.

Consequently, all the scenes feel vaguely familiar as though lifted from the original. If keeping the faith includes keeping the Ten Commandments, especially the one about “Thou shalt not steal,” then director Marcello Thedford is going to have to answer to a higher authority for this blatant, blasphemous and ineptly-executed rip-off.

This dance-driven drama is set on the campus of a historically-black college in Houston where apparently some of the shallowest human beings on the planet have matriculated. For instance, there’s Vicki (Monicka Allegeier), a student who gets ready to party by putting on what she refers to as her “get your freak on panties” in order to seduce Bryan (Chico Benymon), the funky frat boy of her dreams.

I’m not going to bother to relate the rest of the plot which reads like a derivative rip-off of Stomp the Yard. Suffice to say that the black fraternities and sororities are more concerned with winning the $25,000 in prizes to be awarded at a Greek Show Step Competition than with their studies. While waiting with baited breath for the big showdown, we’re treated to a lowbrow brand of humor which runs the gamut from bodily function jokes to mean-spirited teasing coming at the expense of easy marks like a flamboyant transvestite and a deaf dude whose hearing aid is hidden from him for laughs. How tasteless!

A spiritually-debilitating descent into depravity.