A bible belt cross-country youthful journey of discovery in search of family reconciliation, Tennessee is emotionally well meaning enough. But the film more than misses the mark as a road movie whose unintended sense of cultural distance and mostly generic country characters with jarring cosmopolitan leanings, come off rather like big city tourism in out of the way places.

Carter (Adam Rothenberg) is big brother and young surrogate dad to Ellis (Ethan Peck). High school football star Carter abruptly fled Tennessee and their physically and emotionally abusive father some years ago, with Carter in tow along with their mother, who has recently passed away. And Carter has been raising Ellis since then, in a trailer in the New Mexico wilderness.

When Ellis is diagnosed with leukemia and Carter doesn’t qualify as a potential life saving bone marrow donor, the younger sibling convinces his resistant brother to go look for their estranged father, who might provide the necessary match instead. Along the way they encounter Krystal (Mariah Carey), a sassy Texas truckstop waitress with dreams of becoming a country singer. And she joins up with them on a whim to go make a pitch in the Nashville music scene, while escaping abuse of her own from her domineering highway patrol spouse. 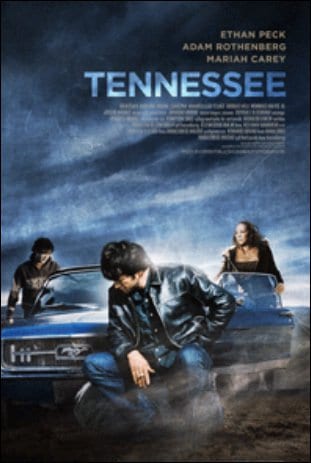 Mariah Carey is more than just the big star in this small story. She’s the warm, charismatic, and deliciously down home presence that spontaneously fills the screen with charm to spare, in this comparatively weak and maudlin story. Though it’s unfortunate and rather lopsided, that the details of her own character lack the attention and depth lavished upon the male protagonists.

In addition, what we have here is once again the black mammy syndrome, as Carey seems to be around mostly to tend to the physical and emotional needs of those perpetually moping males. She’s even repeatedly fetching them food, long after Krystal has called it quits with waitressing. And in the brief interlude when she does get to grab some spotlight and show her far too professional musical skills as a supposed amateur on a stage in an unusually receptive redneck bar, Mariah through no fault of her own, feels as fish out of water forced as you can get.

Tennessee has its moments of tenderly spun brotherly love. But all the secondary characters lack a sense of being fully realized, particularly the many abusive one-note males, seemingly on hand more to make a vague point about domestic violence not being cool, than dramatically resolving or explaining anything about that terrible trauma.