Anybody wondering whether Brokeback Mountain might have signaled the demise of the spaghetti Western need only check out Tears of the Black Tiger to see that the genre is alive and kicking. There is one minor complication, however, since this flick was made in Thailand and features a cast comprised entirely of indigenous actors.

It’s difficult to determine whether first-time writer/director Wisit Sasanatieng intended his picture as a parody or a homage, but that shouldn’t matter to fans of the likes of Sam Peckinpah, John Wayne and Clint Eastwood. For this old-fashioned shoot ’em up is certain to satisfy the bloodthirst of anyone nostalgic for such classics as A Fistful of Dollars or The Wild Bunch.

Tears of the Black Tiger is a tale of forbidden love revolving around Dum (Chartchai Ngamsan), a lowly peasant boy, who falls in love with Rumpoey (Stella Malucchi), a little rich girl from the other side of the proverbial tracks. Despite several noble gestures on his part, their budding romance is repeatedly put on hold, due to distance, her arranged marriage, and the murder of his father by a gang of ruthless outlaws. 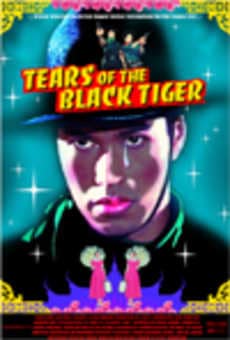 However, the transparent plot remains secondary to the movie’s campy recreation of the ambience of the typical Western from Hollywood’s Golden Age. The macho swagger – the stiff dialogue … the cartoon physics… the gruesome gunplay with no emotional consequence … it’s all in there. Yet, also of note are its self-conscious technical wizardry (such as a slow-motion replay of a complicated death by ricocheted bullet) and its striking cinematography, ever awash in visually-stunning, if digitally-enhanced hues not found in nature.

In much the same way that the endlessly inventive Kung Fu Hustle (2004) took considerable cinematic license while satirizing the Prohibition-era gangster saga, Tears of the Black Tiger represents an equally adventurous attempt to lampoon cowboy movies while simultaneously paying tribute to them as well.

For better or worse, and mostly better, a jaw-droppingly bizarre bastardization.

Tears of the Black Tiger

In Thai with subtitles.