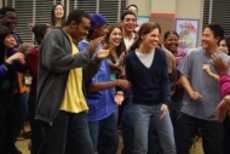 When 23 year-old Erin Gruwell started teaching English at Wilson High in Long Beach, California in the fall of 1994, none of her freshman students expected her to last very long. After all, the rope of pearls around her neck was a sign that the fresh-faced newcomer was from the other side of the tracks, and not very likely to stick it out once the going got tough.

For what Erin soon discovered was that her class was comprised of troubled cast-offs: gang members, substance abusers, juvenile delinquents, the homeless, molestation victims, and other underprivileged kids with special needs. Because they had already been labeled losers by an educational system which expected them to fail, it immediately became apparent that her job was simply to baby sit them till they tired of the charade, abandoned academics entirely, and dropped out.

But instead of capitulating to that crippling mindset which allowed for low expectations, Gruwell decided that she would challenge the prevailing attitude about the prospects for her ethnically-diverse group of ghetto kids. She began by having them read The Diary of a Young Girl, 13 year-old Holocaust victim Anne Frank’s heartbreaking autobiography about the her family’s ill-fated ordeal as they tried to hide from the Nazis.

Erin ostensibly settled on this moving memoir because Anne was about her class’ age when she started writing, and because she had managed to maintain an admirable optimism and sense of perseverance in far more dire circumstances than theirs. Lo and behold, the approach ultimately paid off, as the students were able to recognize parallels between Anne’s and their own predicaments.

Next, Erin had the class start keeping individual journals in which they recorded thoughts and feelings about their own challenging circumstances. Inspired by Anne’s bravery, they eventually embarked on life-changing odysseys which led each to productive college careers. And this real-life over the odds saga is the subject of Freedom Writers, a bio-pic based on the best-seller by both Gruwell and her success stories.

Directed by Richard LaGraenese, the film features Hilary Swank delivering as impressive a performance as her Oscar-winning outings in Boys Don’t Cry and Million Dollar Baby. The capable ensemble cast asked to execute the inspiring adaptation includes Imelda Staunton (for Vera Drake) and Patrick Dempsey, along with a coterie of talented adolescent actors. A fitting testimonial to the human potential to triumph over any obstacle with a combination of courage and perseverance.