The title ‘Tamara Drewe’ is misleading, as she’s not the main attraction and hers isn’t the only story the filmmakers try to tell which is just as well, as she’s really not that interesting. Neither are any of the other characters, but this film is so absolutely twee in its Englishness that it might just find an audience as long as the filmmakers stop calling it a comedy. Giving a film a gory ending, just for the convenience of the plot, takes it out of that genre and, as there’s hardly any humor along the way, it’s not much of a sacrifice at all.

Stonefield Farm is an English writers’ retreat, owned by Nicholas Hardiment and run by his wife, Beth. Nicholas churns out novels while Beth slaves over a hot stove. The owner of the farm next door has recently died and her daughter, Tamara Drewe, returns to the village to organize a refurb of her inherited property. Just after her return, a rock band performs in the hamlet and Tamara, also a writer, interviews the drummer and is so smitten moves him into her farmhouse. Meanwhile, two bored teenagers throw eggs at passing cars and spy on the goings-on in the village. 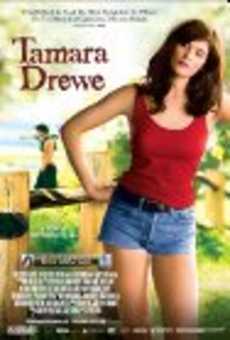 This is an ensemble piece and starts with a strong storyline about the dalliances of Nicholas Hardiment, whose long-suffering wife seems unable to do anything but forgive. It is possible that sexy young girls would become smitten by a successful novelist, however unattractive, but only to a point, and we are taken way beyond this point in this film, particularly given that Nicholas is, to say the least, flabby.

Tamara Drew is extremely glamorous, but doesn’t come over as particularly anything and is somewhat downtrodden by her rock star boyfriend, whose back story is given quite a lot of screen time. This time would have been better spent giving him another dimension and thus avoided the stereotype we ended up with, who does nothing more interesting than play the drums.

And on the subject of jobs, I’ve got a request for writers who write screenplays – can you all please stop writing about writers? I’m not sure how many occupations there are in the world but, for arguments sake, let’s call it a million, so please, get over yourself, and write about what someone else does. It’s not supposed to be about you.