An outside looking in portrait of a singular moment in time that was Woodstock and the Summer Of Love, Ang Lee’s Taking Woodstock also suffers second hand vibes knockoff sensibility, as opposed to the real thing. And while bypassing determined scrutiny of what uniquely defined that sixties generation, Lee angles instead for a focus on more contemporary concerns about sexual identity issues today, imposing them anachronistically like a Brokeback Mountain Musical on acid. And when incidentally, being straight meant you were just not cool, as opposed to something far different in the here and now.

Based on Elliot Tiber’s Borsht Belt turned Bacchanalian be-in memoirs, Woodstock: A True Story of A Riot, A Concert, And A Life, Taking Woodstock stars Comedy Central funnyman Demetri Martin as Elliot, a young Greenwich Village interior designer with money troubles. And so Elliot returns in the summer of 1969 to his Jewish immigrant parents’ mom ‘n pop seedy Catskills hotel, to take a break from life.

But when he gets wind of a major rock concert in the works that fell through in nearby Woodstock, Elliot connects with the promoters to move the venue to neighbor Max Yasgur’s spacious Bethel dairy farm fields. Though little did he know that his proposal would morph into a now legendary historic occasion, as half a million young people descended upon the sleepy hamlet. 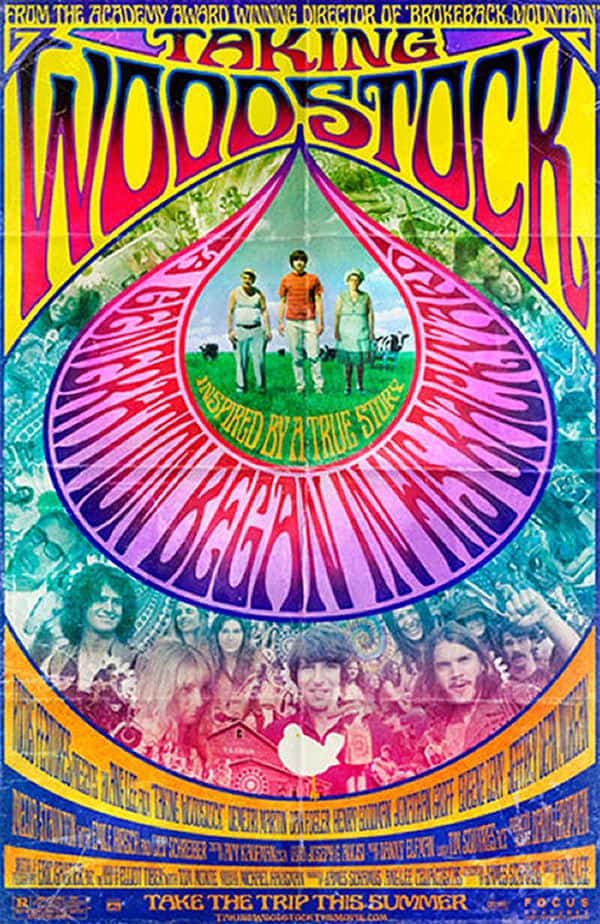 More like dress-up time and playing at being there than actually crystallizing the spirit of what was going down back then, Ang Lee opts instead for a primarily personal story on the muffled margins, as Elliot comes to terms with his dormant sexuality. Though strangely with a little help from Liev Schreiber, as a rather macho flamboyant drag queen doing self-proclaimed security detail on the premises.

But upstaging the far too dramatically laid back Elliot whenever she gets to be around, is esteemed British actress Imelda Staunton substantially dumbing down as Mom. A cranky local yenta and occasional screeching superhero who presides over the fleebag motel she insists is a resort, Sonia runs around routinely nagging the ‘hairy and barefoot’ hippie personas non grata. That is, when not perhaps reminding her impressionable son that women are way too complicated creatures.

Disappointingly sidestepping the actual event with a persistent peripheral vision, even if that was the way Tiber experienced Woodstock, Lee never allows the film to spiritualize or breathe and come alive, and it drowns mostly in organizational plot driven logistics and housekeeping details that surrounded the concert. In other words, a movie crafted as all stoner surface with a contemporary cynical soul. So what emerges instead is a synthetic rather than organic reenactment, that feels more like a full length ‘the making of’ featurette extra on a DVD, than anything else.

Taking Woodstock: Not exactly a bad trip, but in no way a time travel contact high.

The DVD version has these features: Making Of/Behind The Scenes Featurette; Deleted Scenes; Commentary with Ang Lee and Jasmes Schamus.