This film is unoriginal, superficial and borrows shamelessly from blockbusters that have gone before. It lurches incoherently from one half-created world to the next and, in a vain attempt to justify calling itself a thriller, turns up the volume from deadly quiet to deafening which, as a storytelling technique, sucks.

Joe’s mother has just died in an accident at work and his father, (Kyle Chandler) who is Deputy Sheriff of their Ohio town, is struggling to take care of his son on his own. Joe (Joel Courtney) and five of his friends, one of whom is a girl called Alice, (Elle Fanning) are making a film about zombies and while they are shooting late one night they witness a train being derailed intentionally by a car. After this people and pets in the town go missing, objects mysteriously move and the army descends on the town, intent on evacuating the inhabitants who demand answers from the battle-weary Deputy. 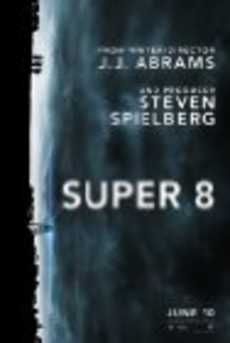 The story that this film believes it is telling is about six teenagers who are making a film, but this is not the case. After the first few scenes not only is this idea abandoned, but the six disintegrate as a team and never go on the Big Adventure that the audience was promised. When the end finally arrives, the resolution comes from an idea snatched out of thin air and only involves two of the boys, making it all seem like one big sell out.

Instead of being allowed to see events from the children’s point of view , we are bombarded with an endless stream of vacuous special effects and force fed extraneous plotlines about Joe’s father and the politics of the police force; Joe’s father’s dealings with the military; Joe’s teacher’s involvement with the military; Joe’s relationship with his father; Alice’s relationship with her father; Alice’s father’s connection to Joe’s mother; Joe’s father’s relationship with Alice’s father and an extra terrestrial alien who is homesick and who, apparently, has a space ship waiting to take him home. So the big question is, why were the kids making a film about zombies, and not about an alien? Irritatingly, as the credits roll, the film the children made is actually played, which the filmmakers probably thought was a genius idea but in fact is a further reminder of their incompetent storytelling. It was supposed to be in the movie.

Steven Spielberg and J J Abrams between them wrote, directed and produced this film and as they are two of the most powerful people in Hollywood, all the studio execs were probably too terrified to point out that the script was a mess and instead convinced themselves that E.T. was so many years ago everyone has probably forgotten the ending. Yeah, right, of course we have, and all pigs are fed, watered and ready to fly.