Where do the popular high school hotties in rural America go after prom night is over? According to the hick flick Sunshine Cleaning, unless you marry into material security, it’s the proverbial out to pasture for women without prospects. Which in this case is minimum wage drudgery. Or, if economic desperation gives rise to a brainchild master plan, in a pinch there’s the euphemistically named endeavor of bio-hazard disposal, otherwise known as crime scene and trauma cleaning mop-up duty.

Directed by Christine Jeffs and written by Megan Holly, two women with an alternately zany and heartbreaking cinematic master plan of their own, Sunshine Cleaning stars Amy Adams as Rose and Emily Blunt as younger goth sister Norah, two outer Albuquerque underachiever sisters struggling to make ends meet by house cleaning and waitressing respectively. Rose is also juggling a dead end affair with a very married cop (Steve Zahn) and life as a single mom with an adventurous young son Oscar (Jason Spevack), who keeps getting tossed out of public school for odd behavior like licking pencil sharpeners and his teacher’s leg.

Determined to come up with the money somehow to enroll Oscar in private school where there may be more compassion for his eccentric behavior, Rose embarks on a vocational scheme in the grueling but relatively well paying crime scene cleanup field of work, after being tipped off to the enterprise by her law enforcement lover. And though lacking the necessary insurance or license to practice human waste disposal, Rose drags along a far from enthused Norah as they make house calls scrubbing blood from the premises of recently departed suicides and murder victims, while engaging in awkward attempts at comforting the survivor relatives. 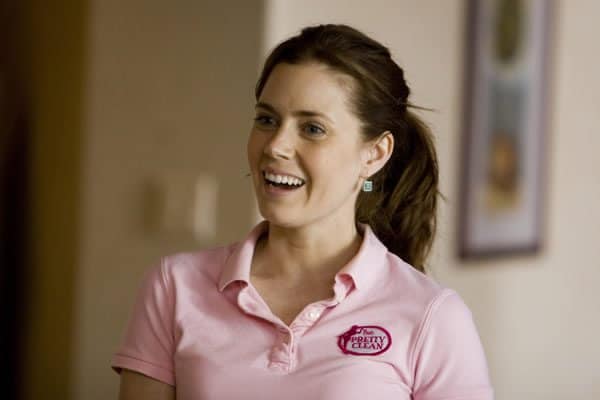 And in the interim while raising the cash for private school, Rose takes along a truant Oscar in tow, or drops him off for some bizarre quality time with his kooky grandfather (Alan Arkin), another family member with seeming DNA designed for the pursuit of outlandish grand plans in life. But when grandpa isn’t available, there’s the one armed shy loner (Clifton Collins Jr.) who runs the local ‘decomp disposal’ supply goods store. Meanwhile, Norah gets into a little beyond the call of duty girl bonding over an edible necklace, with a suicide’s surviving relative, while both sisters spend their late night down time channel surfing, in search of the only two lines their deceased failed actress mom ever uttered in a movie. In which no surprise, she played a minimum wage diner waitress.

Though the story is at times emotionally far fetched in concept, the wacky cast chemistry is never less than superb, while lending class conflict spirit and spunk to that growing body of work that may eventually come to be known as economic crisis cinema. And that devilishly diversifying Amy Adams, who can apparently chew gum and do nervous nuns, bubbleheaded royalty, ditzy screen sirens and mop-up mavens at the same time, keeps the proceedings here moving euphorically along. Sunshine Cleaning: a bit on the grim side, but irresistibly Albu-quirky.