This film tells us how Facebook was born, how it grew and how it grew even more to become the online social network of the decade. But this film isn’t about anything cyber – it’s actually a comment on the ugly face of success and, by the end of this story, so much treachery is unearthed and so many relationships sullied it’s hard to decide who the last man standing is. It’s a war zone, it’s terrestrial based and you don’t have to be on FB to get it.

Mark Zacharrei is a Harvard undergrad and computer programming genius but lacks the social skills he needs to have a life. His latest attempt at a relationship is yet another debacle; he tries too hard, his arrogance trips him up and his date, a fellow student, walks out on him, leaving him alone in a bar. He’s humiliated and intent on revenge so blogs out his venom, becoming so creative his site gets thousands of hits and crashes the university’s network. This attracts the attention of some senior students and they invite Zacharrei to help them set up a social network exclusively for Harvard. So the Social Network is born. 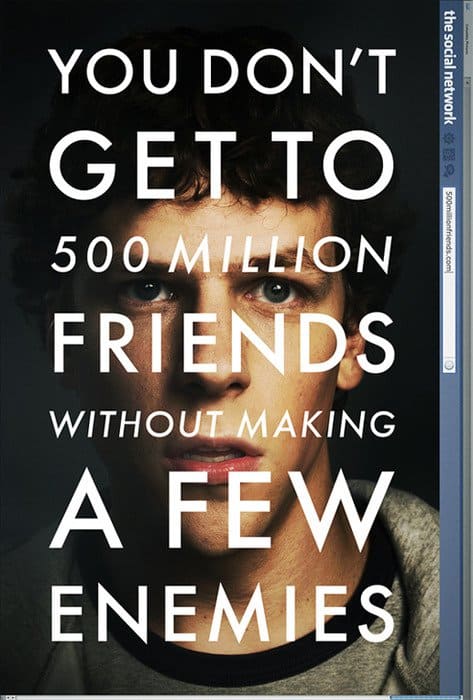 The geek world of computer science is perfectly created and the gobbledygook is crafted so the audience never gets lost. Interestingly, the word ‘wired’ takes on a whole new meaning and there’s a particularly entertaining scene when Zacharrei interviews a bunch of interns. He tells them all to try and hack the local council network and whoever gets in first, gets the job. Word gets out, students tumble in to watch and all of a sudden there’s a party going. Whoever said computer science is boring can’t be hitting the right programs.

Mark Zacchareei is the perfect nurd and, however badly he behaves, it’s hard to feel anything but sympathy for him. He’s a misfit and, in many ways, an underdog, so that’s the guy we root for. This is perfect audience manipulation, brilliant writing and the reason why we go to the movies.

But even more powerful is the fact that the most social network online was created by someone who was incapable of socializing himself and maybe revolutionized how people communicate for that very reason. So how did he do it? Well, first of all he i-chatted with Mohammed, got him to upload the mountain, then he spread the gospel until he had 500 million people sending friend requests and writing on his mountain wall. This not only made him the world’s youngest billionaire but, with the advent of geek groupies, ensures he’ll never be alone in a bar again.

Based on the novel ‘The Accidental Billionaires’ by Ben Mezrich