Jamal Malik (Dev Patel) was just one correct answer away from winning the grand prize of 20 million rupees on India’s version of “Who Wants to Be a Millionaire?” when the police decided to question him about his extraordinary string of luck. After all, no one ever lasted this long on the television game show before, and the producers doubted that this dirt-poor, uneducated orphan from the teeming slums of Mumbai could have achieved his unlikely feat without cheating.

Therefore, the night before his return for his final appearance on the program, they arrange for the authorities to drag the innocent 18 year-old down to the station for a little Abu Ghraib-level interrogation away from the public eye. But despite being tortured by a couple of sadistic cops (Irfan Khan and Saurabh Shukla), Jamal matter-of-factly explains exactly how he came to acquire the answers to such seemingly obscure trivia questions. And soon, what gradually becomes apparent is that everything is on the up-and-up. 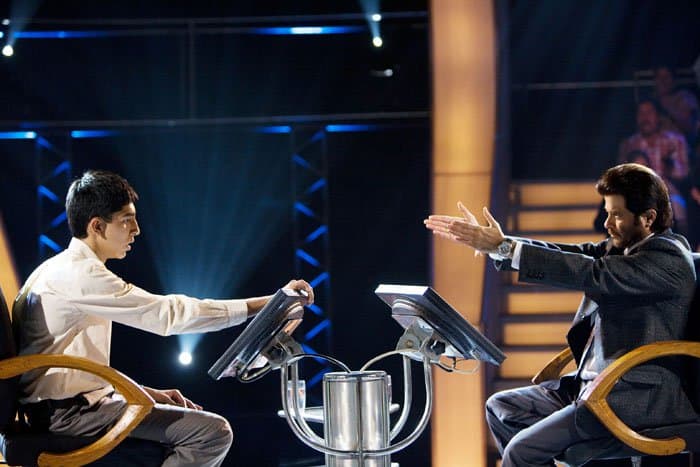 For, all the unfortunate lad has to share is his sorrowful autobiography, an endless tale of woe which he reveals via a kaleidoscope of colorful flashbacks. Surprisingly, it turns out that he’s actually been less concerned with taking home the 20 million rupees than with using his TV publicity as a means of finding his long-lost love, Latika (Freida Pinto), a fellow street urchin and fan of the popular quiz show.

This is the engaging premise of Slumdog Millionaire, a genre-defying romantic thriller from Danny Boyle and Loveleen Tandan. The clever co-directors deftly interweave three non-simultaneous strands of Jamal’s life story into an absorbing triskelion that definitely deserves to be recognized come Oscar time.

One aspect revolves around his climb to the top on Millionaire as he engages in both superficial banter and psychological warfare with the show’s slimy, if unctuous, emcee (Anil Kapoor). That relatively-light badinage stands in sharp contrast with his being mercilessly roughed up by the police who resort to water boarding and electric shocks in quest of a confession. The third part of the picture is devoted to Jamal’s surviving by his wits during his challenging childhood with the help of Latika and his ne’er-do-well older brother, Salim (Madhur Mittal).

Will Jamal die behind bars while being interrogated or will he be allowed his honestly-earned shot at that final question? If back on the air, will he give the right answer and win the loot, will he reunite with his sweetheart, or achieve both goals?

A dizzying, delightful spectacle situated on the Subcontinent well worth the investment for the kaleidoscope of colors splashed across the screen alone. Plus there’s a spellbinding performance on the part of the protagonist Patel, and enough tension to keep you on the edge of your seat from the beginning to the end of this explosive adventure.

In English and Hindi with subtitles.

To see a trailer of Slumdog Millionaire,