Child labor is a serious problem in India. A country that is home to over 60 million child laborers, according to some NGO estimates, hopes to be a superpower.

Is it possible for India to rise while almost 14% of its children are working in the streets and factories?

Or, is India caught in a futile demographic death-trap, where it must routinely sacrifice a percentage of the young population to fuel its growth and the need for cheap labor?

“Siddharth” by Richie Mehta tells the story of a father’s futile search for his son. Mehta, born and raised in Mississauga, Ontario, said he loves making films in India.

Movies from Bollywood have tended to romanticize India’s stark childhood realities, as a staple of Dickensian portraits have been presented for more than 65 years of India’s independence.

Recent films like “Salaam Bombay” to “Slumdog Millionaire” – mostly made for Western audiences by Hollywood production houses, with a mix of sardonic social criticism – have attempted to portray the gritty realities of street life while trying to entertain (“Jai Ho,” to that).

However, for most Indians in India, poverty is not a laughing matter. Many Indians, while grudgingly acknowledging the hard facts, are turned off by the horrific images of children begging and working in the streets presented in Hollywood productions.

Arousing shame and disquiet, Indians often look askance, mostly defensively and with disgust about their deep-rooted social problems. “But look how far India has come” they will often implore you.

Unlike the majority of films made in India in the Bollywood masala tradition, which attempt to distract, distort and titillate, neo-realism deals with Indian social realities with a clear eyed unflinching lens. In the tradition of Satyajit Ray and Shyam Benegal, neo-realism has been somewhat resurgent in India post-liberalization with different guises and shades.

The input of Non-Resident Indian (NRIs) has been critical to this new wave cinema both in terms of production and consumption trends. Indian cinema is now increasingly global in distribution, while many British-Indian, American-Indian and Canadian-Indians have found it easy to make films about their home country with Indian cast and crew, on Indian budgets.

Richie Mehta’s “Siddharth” falls into this genre of film-making, which in an almost documentary-like fashion tells the story of a father’s search (superbly acted by Rajesh Tailang) for his lost son, who has travelled to a nearby town to work to support the family income. After months of working away from home, the boy, who is around 12 years of age, fails to return home on the agreed upon occasion of the Diwali festival.

At this point the mother gets concerned (touchingly portrayed by Tannishtha Chatterjee), but the father is not overly bothered by his son’s tardiness, till of course he realizes some foul play may be involved. The father learns his son may have been taken by child-traffickers. With little resources and no connections, he travels across India in pursuit, with the hope that whatever force arbitrarily took his child away will return him unharmed.

The film shows how the family and friends deal with the disappearance of a young child by first denying it, then gradually coming around to accepting that something horrible may have happened, and finally admitting their failure and fate that the boy may be forever lost in the sea of nameless, faceless, and countless other children who will grow up without the protection of a family.

The most poignant moments in the film show the father searching for a current photograph of the boy to hand over to the police authorities, but can’t seem to find one anywhere in the house or even in a cell phone. In the age of instant photo sharing and social media, we realize the chasm in social conditions among the haves and have-nots.

At several points, we are also painfully reminded that the individualism of the middle class Western educated Indians does not trickle down to the urban and rural poor.

In a chilling moment, when the father speaks to his own father by phone, telling him he may have lost his son forever, we face the inter-generational reality of many fathers, living at the edge of urban landscape, in slum colonies around the world.

The father sadly admits, “I can’t seem to recall what he looks like now … His image is fading in my mind …” The matter of fact simplicity of the conversation between the grand-father and father hits the viewers like cold icy water.

In an interview, Richie Mehta said he got the idea of making the film when a rickshaw driver in Delhi asked him for help in locating his son.

“In 2010, I met a man on the streets of Delhi, who asked me for help in finding a place called “Dongri.” I asked him what it was, he told me he thought it was where his lost son was (!) … Knowing that this man didn’t have the ability, nor the means, to even properly inquire about his son is an unfathomable tragedy. He barely understood why this kind of thing happens, much less how.”

The director said he was struck by the sheer helplessness of the rickshaw driver, who seemed utterly lost or clueless or almost numb to the pain of losing a child.

The film is very well acted, well-directed and shot on the real streets of India. Having already collected several international honors, this film will be a valuable addition to the growing body of neo-realists films about India’s lost childhoods. 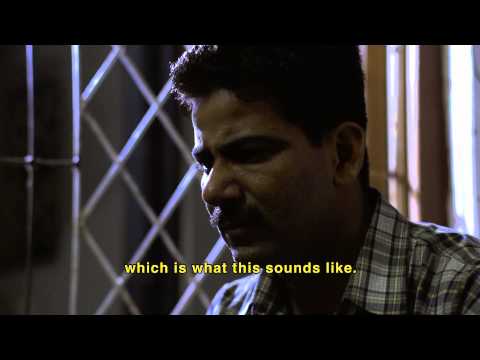