Okay, will each of you reveal some tidbits as to what you’re up to in the movie?

CYNTHIA NIXON: Well Miranda is still in Brooklyn, and is still unhappy about it. And she’s still advancing at her job, in her firm. Her son is thriving, but her marriage is kind of, um, not doing so great.

Miranda also has her mother-in-law to take care of, who has Alzheimer’s. Which takes up a lot of time. So I think that the relationship just suffers. The relationship is the dispensable thing on the back burner. 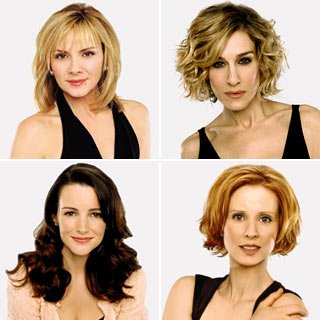 But my fear is that there may be no surprises left! You know, people are going to pay to see it, and I hope there will be something that will be a surprise.

CN: We’re all kind of further along in our lives. But I also think two things. One is that in order to justify our coming back, and also being on the big screen, we need to have big stories.

Like they can’t be about oh, I’m dating a guy and he’s got funky spunk! That’s funny. But that’s not going to carry us through the film. So I think the stakes are really, really high.

And at the same time, I also feel like the way we, the four characters deal with each other, is more mature than it was. None of us are single anymore. We’re all in our own little queendoms. And we come together again, but it’s really on a more mature level.

KIM CATTRALL: Samantha is older, we all are. And that in itself is huge. It’s a huge struggle in our world, still. And that’s why I am so happy to be of a certain age, and playing a woman of a certain age. We changed the way people thought about forty, so maybe we can do that with fifty and maybe sixty, hopefully.

CN: I see women on the street, and I see them in the dress with the hair and the shoes and I think, Oh, we did that! And I’ll see a silhouette and think to myself – and I might be wrong – that woman would not be wearing that outfit, that style of outfit, if it was not for our show.

KD: And did the shoes hurt? Oh, we got used to that. But in the middle of the night, it was as if we’d be thinking, this is how we earn our check, wearing these shoes.

How much of that fashion sense was the Patricia Field effect?

KD: Pat taught us so much, and changed us. The show, and us personally. So I learned a lot. I was a neophyte in all ways to do with fashion, before the show.

CN: I think Pat taught us all a lot of about mixing high and low fashion. You know, if you have one article of clothing that’s very expensive, you don’t have to have the whole ensemble and look like a Christmas tree! And she taught us to wear the clothes, and to not let them wear you. And to really remember that clothes are beautiful.

KC: I learned to just really be irreverent. You are usually supposed to have a specific brooch or a coat, that must look in absolutely perfect taste. But Pat Field is like f*** that, man! Let’s make it yours. Let’s have fun with it.

You go into Pat’s playroom, as I call it, and it stinks like cigarettes! And there’s pizza, take-out food, stuff everywhere. And she’s got a little bit of everything in there. She has designer stuff, and like a rag-picker’s assortment of jewelry from the ’30s and ’40s. And it’s so much fun, because you really feel like it’s dress-up time.

And how about when you’re not wearing clothes?

KC: Then it’s all about lighting! Listen, they have nothing invested in me getting up there and looking not my best. And these are the people who are my family, my friends, for seven years of my life.

So there is no other place that I could do those scenes. And Michael Patrick was also very sensitive to what was appropriate for the movie, and also for Samantha.

How do you see the big impact of Sex And The City on women everywhere?

KD: When we started out, we didn’t think anyone would watch the show! And we’d have these discussions, because we shot the entire first season without anything airing. Usually you work while it airs, and you can gauge people’s thoughts.

But Sarah and I would have these talks about how the feminists are going to hate us. You know, because we were man-obsessed. It’s a feminist show, and we know that now. But we didn’t know it then.

CN: I feel like the big step forward and the big revelation was not, wow, look how much sex these people are having! It was that being single is not a pity party, being single can be really fun! Yes, it can have its heartaches. But there’s also freedom and elation.

That was the thing that we kept hearing from women on the street, often tearfully. Like, thank you for showing what being single is like. And showing that it is like I could have actually chosen this! You know, that it was not just that these women were left at the party without anybody to dance with.

And how about those Cashmere Mafia and Lipstick Jungle small screen imitation knockoffs?

KC: I haven’t seen them. But I’m very flattered, because they sound shockingly like a show that was near and dear to my heart! But it’s not like somebody in the middle of nowhere came up with them.

You know, Darren Star put this whole fantasy together, and so did Candace Bushnell, from the inception. So I have no opinion about them going off and trying to tell more stories about women.

Now for the really big question, who gets the best sex in the movie?