Since I was never swept up into any of the hysteria surrounding Sex and the City during its six-season run on HBO, this big screen adaptation had to serve as my introduction to the adult-oriented sitcom. As someone only casually familiar with the franchise, I anticipated seeing a sophisticated romantic romp revolving around four best friends who candidly confide in each other about the state of their love relationships.

But what I found instead was a bloated blabfest featuring a few of the most shallow, middle-aged females imaginable, immature material girls commenting about men, money, baubles and designer clothes in a flip and superficially manner. When not celebrating conspicuous consumption and the acquisition of status symbols, the film resorts to the sort of comic relief one would ordinarily associate with a typical raunchy teensploit: fart sound effects, poop and pubic hair jokes, a running-gag about a pet in heat, and the current romantic comedy rage, the gratuitous unveiling of male genitalia (ala Forgetting Sarah Marshall, Harold & Kumar 2, et al)

While this much-ballyhooed film version failed to measure up to my expectations, that doesn’t necessarily mean that the TV series’ devoted fans are likely to be as disappointed. Afterall, the picture is essentially an extended episode reuniting the original cast members and placing their characters in plausible predicaments based on their personalities and the passage of time since the show went on hiatus.

Once we get past the opening credits, the NYC-situated saga proceeds to embroil each of the leading ladies in a personal emotional drama. The primary plotline finds narrator Carrie Bradshaw (Sarah Jessica Parker) and John James Preston, aka Mr. Big (Chris Noth) finally agreeing to marry after having dated off and on for ten years. She then calls gal pal Samantha (Kim Catrall) to share her “big decision,” when the lamebrained bimbo guesses, “You finally got Botox.” 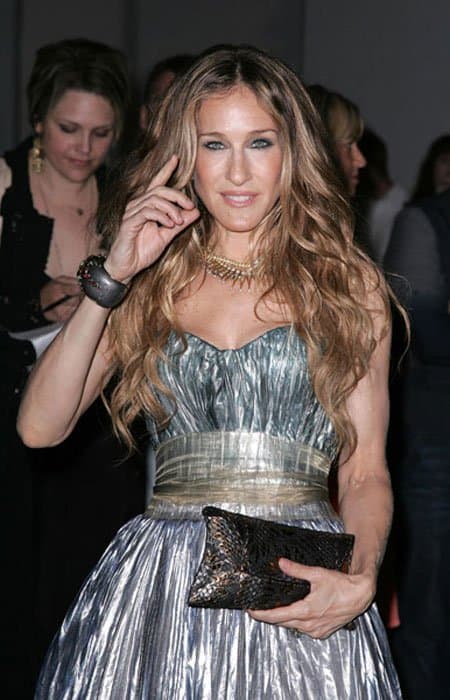 We subsequently learn that sexaholic Samantha, the most promiscuous of the clique, has settled down in L.A. with her neglectful boy-toy, Smith (Jason Lewis), a waiter-turned-Hollywood actor. Her crisis arrives when she finds herself attracted to Dante (Gilles Marini), a tall, dark and handsome hunk next-door with an equally-overactive libido. Will substituting food stifle the carnality she craves, or will that simply pack on poundage?

Meanwhile, back in the Big Apple, Miranda (Cynthia Hobbes), a career-oriented attorney with a five year-old son (Joseph Pupo), has been too busy to notice that she and her husband, Steve (David Eigenberg), haven’t slept together in six months. After he makes an admission of infidelity, she is forced to wrestle with whether she wants to work on or simply abandon the marriage.

The last of the interlocking plotlines involves the disruption of Charlotte’s (Kristin Davis) practically-perfect family life by an unplanned pregnancy. For she and hubby Harry (Evan Handler) had already adopted a Chinese orphan (Alexandra and Parker Fong) after she suffered a miscarriage.

It feels like forever by the time this 2½ hour soap opera ties all these assorted loose ends together, especially given that the dialogue is laced with annoying lines like, “It was the best money I ever spent” from spoiled rotten Carrie about buying a Louis Vuitton. On another occasion, Miranda complains that she can’t get a 917 area code for her new cell phone number, after she narcissistic threw the last one in the ocean in a fit of rage.

Unfortunately, the supporting cast isn’t any more endearing, starting with Jennifer Hudson who plays best-selling writer Carrie’s just-hired assistant, Louise. The Oscar-winner (for Dreamgirls) isn’t given much to do here other than to look relatively frumpy while gushing over her fashion plate boss’ great taste and generosity. Meanwhile, Mario Cantone camps it up as Anthony, a gay wedding planner who seizes on any excuse to steal a scene like a flamboyant queen.

An estrogen-fueled salute to the virtues of excess, if that’s your Gucci bag.