Borrowing weirdly from Dickens and Shakespeare, Seven Pounds updates Scrooge’s miser for the 21st century as Will Smith’s self-centered workaholic yuppie with ill-fated text messaging addiction issues, not to mention acute redemptionitis. Enter Shylock, who strangely enough, literally weighs in with just the cure, hence those pounds of flesh.

And if you’re totally baffled by now as to what’s going down in this movie, stopping by the theater to watch it may not improve matters a great deal. Then toss in Gabriele Muccino, who directed Smith’s kindred workaholic persona in The Pursuit of Happyness, and what you have here is basically The Pursuit of Hokyness.

Taking cues from the nosy neighbor school of moviemaking, Muccino positions his highly secretive tall tale as playing out for the benefit of chronically partially informed audience eavesdroppers, rather than full-fledged spectators. So be prepared for lots of head scratching and involuntary attention deficit disorder, as the undercooked snippets of plot information teasingly unfold. 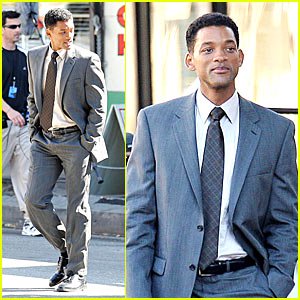 Smith, in his typical impressive pressure cooker character fashion, is Ben, a suicidal IRS agent who raises pet jellyfish and seems to enjoy harassing when not stalking his assigned clients. And it appears that like any run of the mill mobster, he can get away with stuff like pushing a conniving nursing home owner’s head through a plate glass wall because, well, when you’re behind in your taxes, you don’t mess with the IRS. Though Ben does develop a soft spot against his better judgment, for a hottie client (Rosario Dawson) with a bad ticker but a hyperactive libido nonetheless.

Eventually all sorts of sneaking suspicions begin to materialize, that this picture isn’t exactly what it seems to be. Especially when factoring in Ben’s sumptuous mansion by the ocean on an IRS salary, his inconsolable bereavement over the death of his wife, and the perpetually fretting guy’s unusual mounting weight loss related to his metaphorical pound of flesh elimination of assorted body parts. To reveal more would not only spoil the narrative proceedings, but make me feel really foolish even discussing these far fetched matters. Suffice it to say that the jellyfish may deserve a best supporting nod, don’t ask. Paging Dr. Kevorkian.