Will Smith as Widower Wracked with Guilt

Christmas is the perfect time to release a relentlessly-depressing drama about a suicidal widower wracked with guilt over killing his wife in a car accident in which he was fiddling with his Blackberry while driving. Not. But what’s to worry, when you’re Will Smith, and your last eight movies have opened up at #1 in the box-office and grossed over $100 million apiece. That must have been the thinking behind foisting Seven Pounds on the unsuspecting public at the height of the holiday season.

The picture plays like a variation of The Millionaire, if you’re old enough to remember that classic TV series about a reclusive philanthropist who, with the help of his loyal manservant, Mr. Anthony, gave away a fortune each week to a needy stranger, anonymously. Here, we have a rocket scientist, Ben Thomas (Smith), passing himself off as an IRS agent to perform seven random acts of kindness as a sort of penance. He still plans to take his own life anyway, because he’s eager to join his dearly-departed spouse in the great beyond. 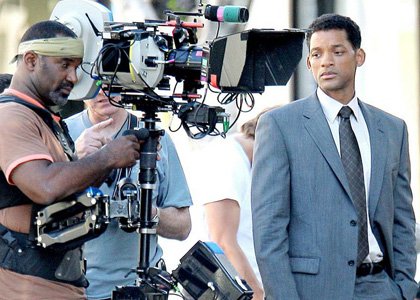 The only reason this transparent film takes two hours instead of two minutes is that Ben must go to great lengths to make sure his beneficiaries are worthy of his blessing. Another fly in the ointment is the seemingly-inappropriate romance which unexpectedly blossoms between him and Emily (Rosario Dawson), the sexiest, terminal heart patient in the history of cinema.

Among the other charity cases are Ezra (Woody Harrelson), a blind telemarketer who keeps his cool when Ben berates him; Connie (Elpidia Camillo), a battered woman too afraid of her violent boyfriend’s outbursts to leave or press charges; Nicholas (Quintin Kelley), a sickly kid in need of a bone marrow transplant; Holly (Judyann Elder), a social worker with cirrhosis of the liver, etcetera. You get the idea.

And you don’t have to be a rocket scientist to figure out how St. Ben will earn his angel’s wings. Consequently, your job is just to sit there and let yourself be manipulated by a syrupy tearjerker that might be well-meaning but drags on long enough to infuriate before the predictable warm and fuzzy moments finally arrive.

Surprisingly superficial for a sentimental message movie laden with schmaltz and mood muzak. Little more than a feature-length public service announcement on the dangers of text-messaging while driving.