Even though Eva Mendes has a reputation lately for playing simultaneously gorgeous and evil in movies, like The Women, Ghost Rider and now Frank Miller’s comic book thriller The Spirit, don’t ever talk to her for a minute about being all body and no brains.

At this gab session get-together for The Spirit, Eva, in the midst of fighting off a serious case of jet lag, gave a detailed discourse on her philosophy of vamp attitude, while listing the various thrills of flaunting 1940s ‘dames’ and ‘broads’ type of appeal, all in a day’s work. And how an uncontrollable lust for diamonds on the part of her materialistic-minded femme fatale Sand Saref, is not necessarily all about doing the gold digger thing. But don’t even think about turning Eva into a mere female accessory, hot or not, in a movie, even if the leading man, whether in Spirit only, happens to be Gabriel Macht. In other words, revealing her fabulous body in nothing but a towel slipping off her rear end is fine, but there had better be an impressive high IQ in evidence behind it, no pun.

What was it exactly that lured you into The Spirit?

EVA MENDES: Yeah I think…Um, what was the question?

Well, what turned you on about your character Sand Saref?

EM: Yeah, I loved that my character was created in the 1940s. So you know, I have this real ‘dame’ and ‘broad’ kind of appeal to the character. And she was just so over the top. And fantastical. And, she has some of the best lines in the movie, you know what I mean? Like, ‘Shut up and bleed!’.

That’s one of my favorites. Which, strangely, I’ve used it since! But for me, this movie was just so collaborative. That was the main thing. Am I even answering your question? I’m sorry, I’m in the middle of jet lag! 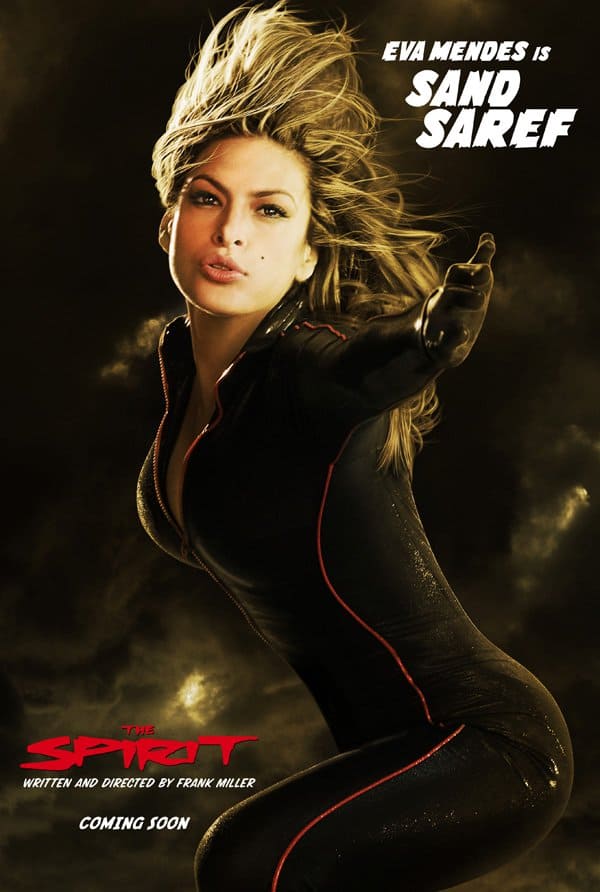 No problem. So how fun is it playing really wicked in a movie?

EM: It was a dream for me to get so wrapped up in this character. I mean, how many times am I going to get to play a woman who’s been married fourteen times! And then killed all of her husbands! And to play a jewel thief.

But the really fun part for me, was definitely putting on the glamour, And putting on the clothes. But the core of this woman, was pain. And we can superficially look at it and say, oh god, she’s a diamond thief. You know, how superficial, diamonds. And yada yada yada.

But then I realized that symbolized, because of her past and not having anything be stable in her life, that a diamond is actually a rock. And that symbolizes stability, because it’s so solid. And once I found that foundation, then it made me realize where she was coming from.

So then I could go big, and be as ridiculous as I wanted to be. Whether it was in hair style or action, or in wardrobe. You know, as long as I was rooted in that major need to fill that void. So I had a fantastic time.

And again, it’s from one of my favorite periods, when women were dames and broads. You know, they weren’t afraid to speak their minds and throw out their attitude out there, and flaunt it. Yeah.

Did you ever feel like you were just some sort of sex object in this whole scheme of things?

EM: Well I think the point here is for me, is that if I just felt like an accessory, first of all I wouldn’t have done the film. And then if I felt I had been pressured to just be that, for whatever reason, I would have felt really shitty about myself.

EM: You know, just flaunting it, without having a foundation. But the point is, that my character uses everything she has as a woman, to get what she wants. So in the reveal, when I actually show my backside, The Spirit is asking for it, you know?

Like I’m only wearing a towel, and he says, ‘hands behind your head.’ And I’m like, oh really. You know? So she’s a smartass who’s gonna get what she wants. And she got out of that arrest by using her body in that situation. And if there were no brains behind that body, I would have had major qualms about that character.

But she’s so kickass in every way. She’s such a smart dame, that, yeah., part of her sexuality, part of getting what she wants, is…turning up the sex. So yeah, I had no problem with it. For this film!