It’s been a decade since the homicidal maniac known as Ghostface (voiced by Roger L. Jackson) last embarked on a harrowing reign of terror around the City of Woodsboro. Over the uneventful interim, calm has returned to the tight-knit community where the only visible reminder of what once transpired are the replicas of the sadistic slasher’s mask (ostensibly-inspired by Edvard Munch’s “The Scream”) which some perverted pranksters nailed to telephone posts as a macabre tribute to the tragedy.

Such insensitive attempts at gallows humor notwithstanding, proud survivor Sidney Prescott (Neve Campbell) feels that it’s finally safe to return to her hometown for the first time in years. So, despite having been Ghostface’s primary target, she schedules a visit as the last leg of a promotional tour for her recently-published memoir about the sensational killing sprees. 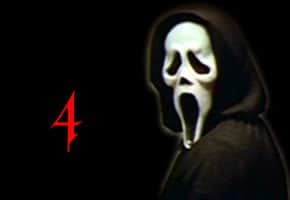 Unfortunately, right after her arrival, Sheriff Dewey Riley (David Arquette) interrupts the book signing to announce that the disemboweled remains of a couple of teenagers (Brittany Robertson and Aimee Teegarden) have just been discovered, and that it looks like it might be the work of a reincarnated Ghostface. Then, when he subsequently finds a blood-stained hunting knife in the trunk of Sidney’s rental car, he orders her to stick around Woodsboro until her name is cleared.

This double-murder jumpstarts the fresh round of senseless slaughter serving as the raison d’etre for Scream 4. Directed by Wes Craven and written by Kevin Williamson, the high body-count shriekquel is designed for devotees of the franchise who appreciate its effective combination of spine-tingling suspense with clever, self-reverential parody of the scary movie genre.

As for the unremarkable plotline, Scream 4 revives the fairly formulaic “crazed madman with a penchant for stalking attractive teens home alone or in wooded areas” theme. Nonetheless, it is tautly-enough edited to keep you on edge and guessing the villain’s identity for the duration. Plus, the picture features plenty of welcome comic relief via “Stab 7,” a film within the film which periodically enables characters to poke fun at horror flick conventions and cliches.

A worthy sequel certain to scare the bejesus out of Scream franchise fans with a strong stomach for gratuitous gore.

kam Williams is a Syndicated Film and Book Critic Who Writes for 100+ Publications. He is a Member of The New York Film Critics Online, The African-American Film Critics Association, and The Naacp Image Awards Nominating Committee. Contact Him Through Newsblaze.