This film is billed as an action thriller, but action in a claustrophobic cave is pretty limited and thrills only come when there’s tension. It’s really nothing more than a bad Blair Witch, but instead of using a hand held camera it was shot on 3D. So it’s pretty, but dull.

Frank McGuire (Richard Roxburgh) is a master cave diver who is working in the subterranean South Pacific. His son Josh (Rhys Wakefield) arrives with the financier of the project, Carl Hurley (Ioan Gruffudd) and they join McGuire’s team underground. Within hours a tropical storm breaks, the rocks around them crumble, their exit is sealed and Frank is left to lead his team out of the labyrinth that lies between them and the rest of the world. 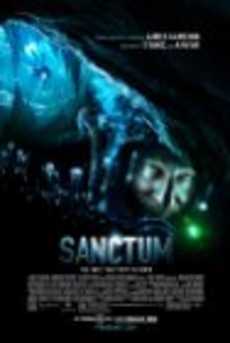 This film starts with a lot of clunky exposition. Josh gets told repeatedly how lucky he is that his father takes him on expeditions, and Josh responds that he doesn’t want to be there. As soon as father and son meet they’re at loggerheads but, fatally, we never learn what the real issue between them is. It’s clear that Frank’s way of working is a little too tough for the sensitive Josh, but this is far too simplistic to take a character, and us, on a journey. With so little to work with, their relationship becomes painfully predictable and, by the time we get to the end, we know we’re going to hear an “I’m proud of you son” and an “I love you Dad,” which I know is officially a spoiler but everyone’s going to guess anyway so it doesn’t really count.

Essentially, this is a story about six people trying to escape from their underground tomb, and the only way it could work is if we have an emotional connection to at least some of them, even if it’s negative. But the characters are like cardboard cut-outs, there’s no one to like or dislike, and if by some accident of fate they’d all toppled headlong into a cave two hundred feet below, no one would have cared.

Apparently, what attracted the producer, James Cameron, to this project was the opportunity to employ the 3D photography techniques he developed to lens Avatar. In other words, he paid $30 million so he could play with his new toy. Whoever said Hollywood producers are overpaid? Well, actually, it was the writers who got crushed when they went on strike a couple of years ago, claiming the Hollywood fat cats make obscene amounts of money at the expense of starving writers. If only they had some proof.