Salt is Sony’s summer release action thriller, starring Janene Carleto and Nicole Callender, featuring Angelna Jolie. The reason AJ doesn’t get star billing here is because the film is 99 minutes, 70 of which are action sequences that no A list actor could ever get insurance for. It’s what happens when you start collecting $17M a movie; you put a price on your head that no one can afford.

Evelyn Salt (Jolie) is a top CIA agent, married to a German, and is on her way home to celebrate her wedding anniversary when a Russian defector surrenders to the CIA. He gets interrogated, and claims that Evelyn Salt is a Russian double agent. So her fight for survival begins.

The first six sequences are Salt trying to escape, giving her pursuers a run for their money, getting trapped, nearly/getting caught, and escaping. These sequences are long and I’ve never seen anyone run so much in my entire theatre going life. At one stage it looks more like a decathlon than anything else. After the first three sequences, I got this ‘oh, come on’ feeling, and then I got it again when our superhero leaps from one window ledge to the next and manages to make it around an air-conditioner with no visible means of support. I realize the idea of going to the movies is to suspend disbelief but as the filmmakers gave me no reason to do this, I’m nitpicking instead. 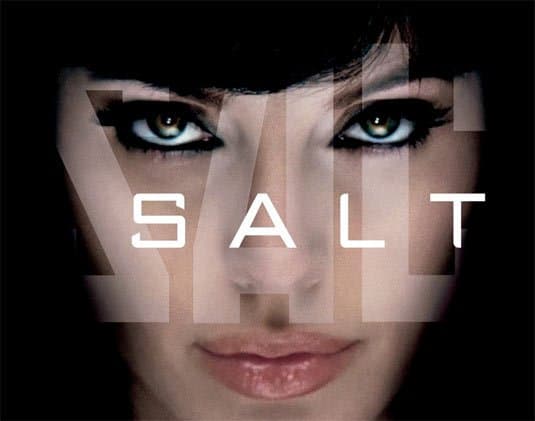 Which brings us to the claim that AJ does all her own stunts (despite credits that state otherwise). It would be entirely possible for someone to clamber over that air-conditioner on the floor, have it filmed horizontally and screened vertically, but what about the rest of the stunts, even allowing for CGI? In one scene AJ drives a truck off a bridge, in another she throws herself off a balcony and hangs on only by the chain she is using to choke someone to death (Salt at her most charming), and another when she leaps down an open elevator shaft. Oh, come on.

Placing all absurdities aside, there are also a number of plot holes and inconsistencies, one of which is in the initial set up when Salt is imprisoned by the N Koreans. Here, she is totally unable to defend herself, yet in the rest of the film she kicks ass in supernatural style, taking out 10 Russian agents in seconds and swatting off CIA agents like flies. So her initial helplessness is a bit of a conundrum.

But the biggest problem with this film is that the action never slows and there is no time to take pause and discover the ‘whats’ and the ‘whys’ and the ‘therefores’. Instead, a few occasional flashbacks are thrown in and then we are whizzed right back to the head-spinning action, which is really very lazy writing. The scenes are all visually magnificent, but it’s a bit like going to a five star restaurant every day and being served flaming chipolatas on a silver platter by a well dressed waiter. After a while, white tablecloths get boring and all you really want is something with a lot less sizzle and a lot more sausage. I think it’s called story.