Sly Stallone’s Swan Song as Italian Stallion Out on DVD 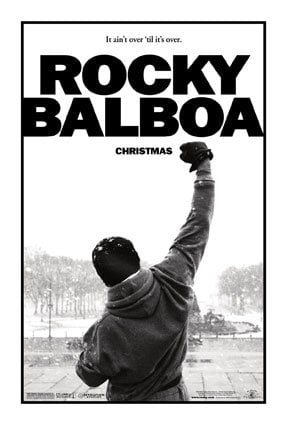 In 1977, Rocky won the Academy Award for Best Picture after the title character created and portrayed by Sylvester Stallone had captured the hearts and imaginations of movie audiences everywhere. Sly would bring the perennial underdog out of retirement for four sequels, till the pugilist from Philly appeared to hang up his gloves for good in 1990 in Rocky V.

Rocky Balboa, though technically the sixth in the series, sure seems an awful lot like a remake of the first film in the storied franchise. Again, we find the Great White Hope down on his luck, and yet he somehow lands a shot in the ring with the reigning Heavyweight Champ, Mason Dixon (Antonio Tarver), aka “The Line.”

As the film unfolds, we find the Italian Stallion grieving the passing of his beloved wife, Adrian (Talia Shire), and grasping at straws to find some meaning in life. He perseveres for the sake of their son, Rocky, Jr. (Milo Ventimiglia), and he even finds an understanding shoulder to lean on in Marie (Geraldine Hughes). She’s a character from the original flick now revived more as an emotional sounding board than as a legit love interest.

Fading fame has reduced Rocky to a greeter at his restaurant in his old neighborhood, and money woes have him mulling over climbing back inside the squared circle. Then, when an ESPN airs a computer-simulated showdown between him and Mason Dixon, it’s just a matter of time before a challenge is issued for a battle royal in the flesh.

His ensuing, rigorous training regimen enables Rocky to revisit all his old haunts, and though only three-rounds, his gutsy exhibition versus The Line manages to tug at the heartstrings in a way likely to leave you wiping away tears afresh. Only instead of “Yo, Adrian!” it’s Marie’s turn to rush breathlessly up the aisle as the winner of the bout is announced.

DVD Extras: Deleted scenes, an alternate ending, boxing bloopers, audio commentary by Sly Stallone, “The Making of” and a couple of other featurettes.