Rise of the Planet of the Apes is the seventh installment in the fabled Fox franchise which began way back in 1968 with the legendary Charlton Heston as the leading man. This episode stars James Franco as the protagonist of an origins adventure dedicated to explaining exactly how an antagonistic army of anthropomorphic primates came into existence.

The film unfolds in present-day San Francisco where we find Dr. Will Rodman (Franco) working feverishly on a cure for Alzheimer’s at Gen Sys, a prominent biotech corporation. Besides having an altruistic concern for the general welfare of victims of the disease, the dedicated scientist also has a personal stake in the research, since his father (John Lithgow) has recently started showing signs of senility.

Dr. Rodman meets with some very promising results after testing a genetically-engineered retrovirus he’s developed in the lab. ALZ-112 appears to not only repair damaged brain cells, but the miracle drug even has his favorite chimp, Bright Eyes (Terry Notary), exhibiting several signs of human-like intelligence.

Unfortunately, on the very day that the doctor arranges to announce the exciting news to the company brass, the chimp escapes from her cage and goes on a destructive rampage all around the facility. And when she finally crashes through a plate glass window into the meeting of the board of directors, she is shot to death on the spot by a security guard.

Next, Gen Sys’ mortified CEO (David Oyelowo) impulsively orders Will to euthanize any other animals already administered ALZ-112. However, with the help of a sympathetic orderly (Tyler Labine), he secretly saves Bright Eyes’ newborn by sneaking it out of the suddenly hostile institution.

Will and his gorgeous veterinarian girlfriend, Caroline (Freida Pinto), are able to raise little Caesar (Andy Serkis) like a child because of its ALZ-112 altered DNA. Although the sensitive couple manages to forge a tender bond across species, sadly, the same can’t be said for their neighbors and the rest of humanity which remains cruelly inclined to judge a chimp by the covering of its skin instead of by the content of its elite mind.

Therefore, it’s no surprise when Caesar finally gets fed-up enough to steal some canisters of Will’s new and improved formula, ALZ-113 in order to free and inoculate legions of fellow apes from zoos and labs en route to a bloody showdown on the Golden Gate Bridge. A feel-good flick which proves that primates are people, too!

Trailer for Rise of the Planet of the Apes 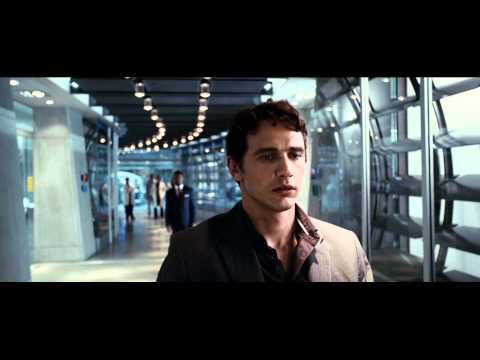 To order a copy of the Rise of the Planet of the Apes 2-Disc Blu-Ray/DVD Combo Pack, visit: amazon