That suspiciously wrinkle-resistant Sylvester Stallone returns as Rambo over a quarter century later, still really mad at the world. But possibly also fuming that white collar superheroes have been grabbing all the screen time lately instead, with their own moves to straighten out the world singlehandedly. Including those elite couch potato boozer vigilantes played by Tom Hanks with his Afghan romp in Charlie Wilson’s War, and Richard Gere doing Bosnia in The Hunting Party. And the sulking survivalist John Rambo hasn’t tired a bit even after a double dose of sequels, and still in serious need of some anger management.

Chronic post-traumatic stress disorder afflicted Viet vet Rambo has now relocated, for no apparent reason, to the jungles of Burma. And with very little to say, whether in subtitled local dialect or English, much beyond three emphatic, snarled words. When a band of do-gooder Christian missionaries from the US shows up and pesters Rambo to give them a lift in his boat to an area in the midst of a bloody and brutal civil war, the monosyllabic dude declines. That is, until a fetching blonde in their group, Sarah Miller (Julie Benz) works her charms on the scowling, back-to-nature guy, in a kind of beauty and the beast exotic interlude. 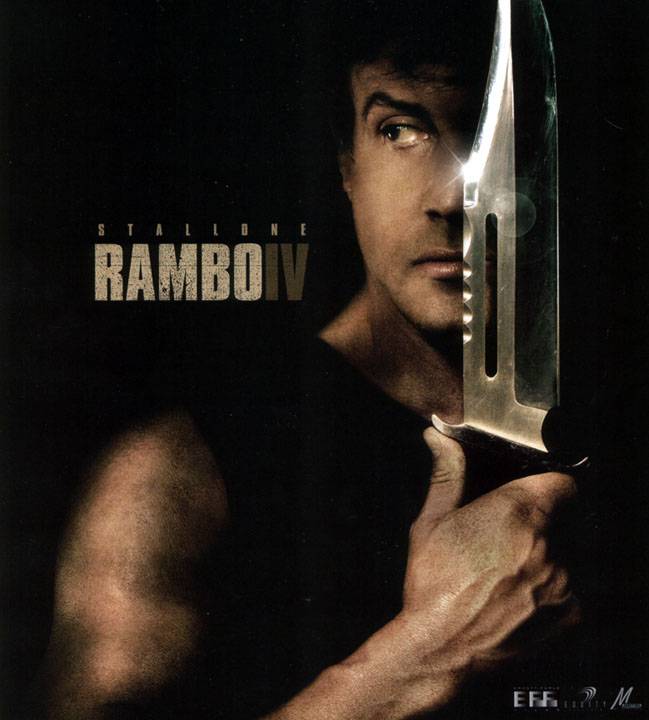 So begins the nonstop shooting, gouging and dynamiting of fleeing civilians – with Rambo not too shy either to get into a little ripping out of throats with bare hands and selective disemboweling too. The terrified local villagers find themselves caught between the Burmese army and tribal Karen rebels for no reason that’s ever explained. Other than the civilians seeming to serve as subjects of some irrational sadistic sport, for target practice or as sex slaves for both warring sides. I might mention at this point that there is in reality a method to this observed chaotic madness, having to do with the lucrative methamphetamine and opium production in the area, that thrives on such orchestrated anarchy. But that would be entirely irrelevant to a story relying on effects without causes.

Stallone is competent as a filmmaker, with a knack for effectively infusing energy and atmosphere into action sequences. And conjuring an elaborately helmed tropical terror spree travelogue seems to be his strong point here. But Stallone’s skill as a screenwriter and penchant for slim narrative and even scantier dialogue, (in collaboration with Art Monterastelli), could use the kind of sharpening he applies to those arrows he wields so impressively in his show-off archery assaults.

A politically neutered script set in Burma but shot in Thailand, and potentially generic enough to sub for just about any hotspot on the planet, hardly seems a blueprint for stimulating audience shock and awe for the duration. Then there’s the matter of the same old damsel in distress scenarios, as that hottie adventurer Sarah spends most of the time holding her ears and shrieking, never allowed to outwit a single baddie or save anybody, even herself. Though she does manage to turn that hero of steel into an emotional wreck, even if inadvertently. All that life saving, and nothing to show for it except another bad case of tropical depression.